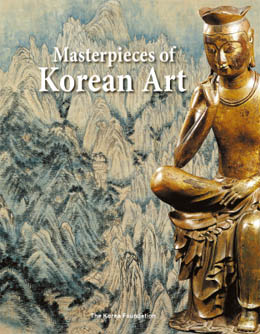 For those who consider ancient Korean art too broad and intimidating a subject, the Korea Foundation on Nov. 3 published “Masterpieces of Korean Art” to make it more approachable. It is the third installment of a four-book series called “Selections from Koreana.”

The book divides artifacts into six categories based on format and use: Painting, Buddhist sculpture; metal craft; pottery and ceramics; wooden and lacquer crafts; and stone pagodas. 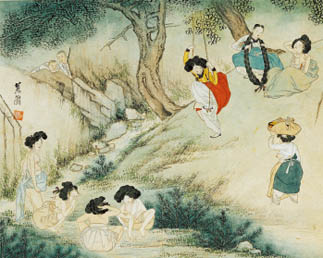 “A scene on Dano Day” by Shin Yun-bok

In all, 40 articles introduce 80 Korean artifacts.

About half of the book consists of reprinted articles from “Koreana” magazine, which has specialized in Korean culture for the past 24 years. The other half of Masterpieces of Korean Art consists of items recommended by experts from the National Museum of Korea and numerous other experts.

The Korea Foundation has been dedicated to the dissemination of information on Korean culture and the arts since 1987. From 1994 to 1997, it published the “Korean Cultural Heritage Series” of books written in English. It included four books: “Fine Arts,” “Thought & Religion,” “Performing Arts” and “Traditional Lifestyles.”

Since the series was immensely popular among foreign art critics and those interested in learning more about Korean art, last year the foundation began publishing its current series, Selections from Koreana. As the four books from Korean Cultural Heritage Series were a compilation of articles examining subjects in the 1990s, the new series would include articles accumulated over ten years since 2000.

The first two books of the new series, “Masters of Traditional Korean Handicrafts” and “Modern Korean Artists,” were published last year, the latter of which was chosen as a representative book on Korean culture and presented to foreign dignitaries by the Blue House, most notably to U.S. President Barack Obama during his visit to Korea in November last year. Kim Mi-young of the Korean Foundation also said the book has been distributed by the Ministry of Foreign Affairs and Trade.

The foundation is now working on the fourth and final book of Selections from Koreana and is scheduled to be released by the end of the year.

The foundation is also working out the logistics of donating the series to public and private libraries, colleges and museums around the world so that more people abroad have a chance to become familiar with Korean culture.

Masterpieces of Korean Art was produced so non-Koreans could get a more intimate, Korean perspective on the country’s arts through the eyes of locals. Professors, scholars, and museum and art gallery curators specializing in each category helped write the book to include Korean sentiment.

“Examination of art based on style is the key to identifying the essence, characteristics, origins, and change over time in a nation’s tradition of formative arts,” wrote Ahn, explaining that Korean art contains “distinctly Korean elements” inherited from art tradition as well as “cosmopolitan elements” assimilated from China and other foreign countries.

Masterpieces of Korean Art is 50,000 won, and it can be purchased at the country’s biggest bookstores, including Kyobo Bookstore.