Book a year-end party, for boozers and the more refined

Book a year-end party, for boozers and the more refined

As December draws near, reservations start to pour in for year-end parties. Above and top right is Jazzy M.A.S., a place to exhibit artwork or throw a party for up to 200 people. By Kwon Hyuk-jae

Picking a good venue for a year-end party - be it for colleagues or friends - is not an easy task. Everyone wants to throw a memorable event, while staying within a limited budget.

Time is running out. If you don’t have a reservation by the end of November, expect to throw a year-end party in January.

For those who are racking their brains, here is a list of diverse places with good atmosphere and reasonable prices. Some venues are suitable for booze-infused parties, while others are more suited for a refined crowd that would rather peruse art and sip wine.

Most notable this year is the popularity of art galleries and specialized spaces for smaller gatherings.

If you plan a party involving more than 30 people, renting a whole cafe or restaurant is the most common way to go - but it is not cheap. Another option is to book dedicated party venues, which are growing in popularity. They are relatively cheap compared to renting out an ordinary cafe or restaurant, and many offer catering services.

Jazzy M.A.S. sells coffee and beverages by day, but functions as a bar at night. Artwork covers the walls, creating a unique atmosphere. It is available for medium-sized parties and is often rented out as a gallery. Up to 200 people can be accommodated for standing-room only. Booking the entire establishment will set you back 1.8 million won ($1,636) for seven hours - but renting out just the cafe costs no more than 1.2 million won for the same amount of time.

If your boss is a penny-pincher, he might prefer to go for the much cheaper option - the gallery. At 400,000 won for the day, you also get access to a beam projector and amplifiers. 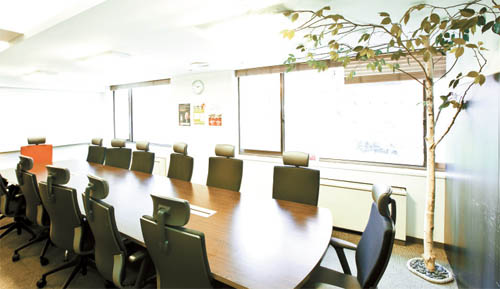 A room for 12 people at Toz, which rents space for diverse groups from a single person to more than 50. By Kwon Hyuk-jae

Jazzy M.A.S. is located on Garosugil, a hip district in Sinsa-dong, southern Seoul, with plenty of cafes, restaurants and boutiques. For more information, call (02) 3445-8067 or go to www.jazzyspot.com.

24/7 opened its doors in September. It is equipped with karaoke machines, along with special lighting effects and even a dry ice machine. For a little extra, book a DJ to shake up your party. Package rates run from 300,000 won to 600,000 won, which includes alcohol and simple finger foods. On weekdays, it costs 100,000 won per hour and 150,000 won per hour on weekends. Up to 50 people are accommodated.

As its name suggests, Club L is a nightclub that is often rented out for year-end parties. Due to the nature of the venue, it has quality sound and lighting systems. When it is standing room-only, 300 guests can squeeze into its 230 square meters (2,475 square feet) of floor space, while there is room for 150 chairs. The club will even decorate the hall according to a certain theme. There is a small stage, as well as a huge screen. 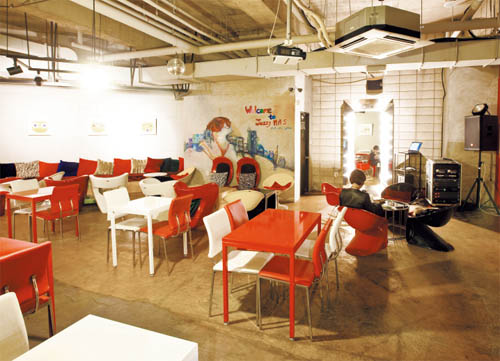 As December draws near, reservations start to pour in for year-end parties. Above and top right is Jazzy M.A.S., a place to exhibit artwork or throw a party for up to 200 people. By Kwon Hyuk-jae

The Hada combines characteristics of a cafe and a bar. It has a cozy feeling when its capacity of 30 chairs is reached. If business isn’t booming, this is another affordable option, as it will cost your boss just 50,000 won to 70,000 won per hour.

If your party includes 50 people, get unlimited beer and 20 side dishes for three hours for another 1 million won. A huge beam projector and audio system are available for rent. “The Hada” is a play on words that sounds like the Korean verb “to add.”

The Hada is located at the entrance of Sungshin Women’s University, northern Seoul. For more information, call (02) 923-4111 or go to blog.naver.com/thehada.

For study groups and meetings

Spaces for study groups and meetings are becoming busier in Seoul. Most rooms include access to printers, monitors, and fax and copy machines. While this isn’t exactly the place to let loose at a year-end party, you can expect to get a lot more work done.

Toz is a first-mover in the industry, having started the trend of renting places for study groups and other small gatherings. After taking note of a lack of places to gather, despite hundreds of thousands of online communities, the company opened its first branch in Sinchon, central Seoul, in January 2002. Since then, the company has opened 11 more branches in Seoul and three in Busan. Rooms for a small group up to 50 people are available.

Fun Idea has 11 rooms and each is equipped with high-speed Internet. On weekdays, it costs between 1,200 won and 1,500 won per hour for an individual user.

With the spread of DSLR cameras, many amateur photographers are looking for a place to display their photographs. If you’re one of them, this list will recommend affordable spaces for hire without the high prices of galleries. And if you’re in an industry where creativity is crucial, renting a small art space for a year-end party (instead of getting wasted) just might be a good way to light a fire under your employees’ creative bones.

Between 10 and 15 pictures can be displayed on the walls of this cozy place of 40 square meters. The rental price and period should be negotiated with the organizer in advance. If the exhibition is not commercial or political, the gallery says it will provide discounts.

It is located at Jonggak Station, central Seoul. For more information, call (02) 730-1233 or go to http://cafe.naver.com/yeulldam.

This place is dedicated for amateur artists, which means it is free of charge to anyone who has passion for the arts. Because of its vicinity to Ttukseom Station, line No. 7, it is very accessible. About 100 pieces of art can be displayed in the exhibition hall. Political or commercial art is not allowed.

Riverview 8th Avenue is located right on the middle of Gwangjin Bridge. It’s spacious, with 260 square meters that overlooks the Han River. Amateur artists might even be able to rent space for free, but it has strict rules about doing so. A proposal and portfolio are required.