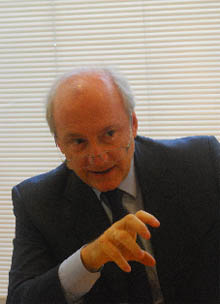 French President Nicolas Sarkozy agreed earlier this month to return 296 volumes of Joseon Dynasty royal protocols kept at the National Library of France, a long-anticipated follow-up to the promise made by former President Francois Mitterrand.

During a visit to Seoul in 1993, Mitterrand brought one volume of the Uigwe that France had taken from a royal library of Korea’s last monarchy, pledging to return the rest.

Hubert Vedrine, a former French foreign minister, was one of the key foreign policy advisers to Mitterrand when he made the decision.

“I like Sarkozy’s agreement because it follows through on a promise by President Mitterrand,” Vedrine, 63, said Wednesday during an interview in Seoul.

The longest-serving aide to Mitterrand, Vedrine worked as secretary general at the Elysee Palace and was chief foreign affairs adviser to Mitterrand between 1981 and 1995, the entire time Mitterrand was president. Vedrine served as foreign minister between 1997 and 2002 under President Jacques Chirac.

Vedrine, now president of the Francois Mitterrand Institute, said Sarkozy’s decision, like Mitterrand’s, was welcomed by liberal-minded intellectuals and politicians in France. But he said it also drew the ire of the country’s conservatives, in particular government officials dealing with cultural issues, librarians and curators. French law limits the return of cultural assets for a maximum of five years.

“The reluctance to return historically valuable items brought from overseas, even colonies, is observed universally among the conservatives of Western countries,” he said.

A foreign affairs veteran, he said he was not surprised by the North Korean attack. He said that such behavior is not out of the ordinary for the North and that though the attack was especially vicious, it has little chance of escalating into an all-out war.

“North Korea is a country that needs to keep creating tension to sustain the regime,” he said. “But because it does not want to plunge itself into danger, it wouldn’t attempt to do something that could seriously threaten the security of the South.”

He said South Korea’s role in the international arena has risen dramatically, enough to assume the chairmanship of the G-20 Summit, and it is no longer under the shadow of its hostile northern neighbor.