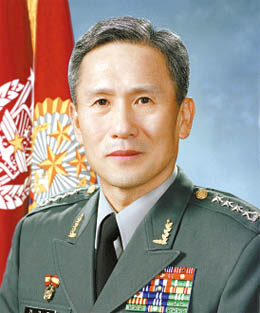 President Lee Myung-bak named yesterday Kim Kwan-jin, former chairman of the Joint Chiefs of Staff with a nearly 40-year career in the Army, as his new defense minister.

The appointment came a day after Lee accepted the resignation of Kim Tae-young, ending his 14 months in the post, to take responsibility for the military’s poor readiness against Tuesday’s North Korean shelling of Yeonpyeong Island. Kim Tae-young managed to hold onto his job after the March sinking of the Navy warship Cheonan, which Seoul blames on North Korea, despite similar criticisms of lack of military readiness.

The newly appointed defense minister is a 61-year-old native of Jeonju, North Jeolla. He graduated from the Korean Military Academy in 1972 and served in key Army posts. He was the nation’s 33rd chairman of the Joint Chiefs of Staff from November 2006 to March 2008, and was replaced by Kim Tae-young.

“Gen. Kim Kwan-jin is a veteran soldier who has served in both decision-making and in field units,” said Hong Sang-pyo, senior presidential secretary for public affairs. “He is known for his broad expertise in policy and strategy making.”

While serving as head of operations command headquarters of the Joint Chiefs of Staff from 2004 to 2005, he was in charge of Korean troops’ deployment to Iraq.

Hong said the president thought Kim was the best candidate to make “cool-headed judgments swiftly and sternly in times of an emergency.”

“He is a classic example of a soldier with a practical yet strong leadership,” Hong said, adding that the Blue House has faith in him to carry out reforms proposed after the Cheonan sinking.

Hong also said the Blue House believed Kim was the best candidate to restore the nation’s confidence in the military and to improve its plummeting morale. “He is highly trusted for his professionalism, convictions and integrity in and out of the military,” Hong said. “We believe he is the appropriate candidate as the new defense minister at this critical time.”

The nation’s military has been under fire for its poor readiness against the North’s provocations. A series of accidents during drills has also fueled public distrust in the leadership.

“We believe it is necessary for the new minister to begin his job as soon as possible,” Hong said, adding that the Blue House is expected to request the National Assembly on Monday to hold a confirmation hearing for Kim.

Hong said no decision had been made to appoint the successor to Kim Byoung-gi, who was fired Thursday as the presidential secretary for defense affairs.