Anger grows as citizens flee other nearby islands

Anger grows as citizens flee other nearby islands 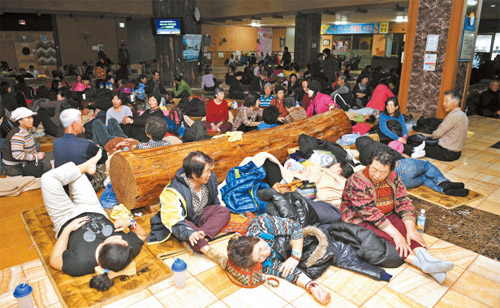 
South Korean residents on the five islands nearest to the disputed maritime border between North and South Korea on the west coast have had to deal with constant tension between the two countries. Now, many are saying the Yeonpyeong Island attack - which rendered the village on the island unlivable - was the last straw. Concerns are growing that the other four island will become ghost towns.

Complaints are also growing among Yeonpyeong residents that the military left them with little protection during the attack and offered inadequate help during the subsequent evacuation.

As of yesterday, about 98 percent of Yeonpyeong Island residents had left the island, according to Choi Cheol-young, an island official in charge of the island’s situation room. Only 30 have chosen to remain out of more than 1,400 residents who lived on the island before the attack.

According to information from the city of Incheon, the other islands are quickly being drained of its residents. Up to 400 residents of Baengnyeong Island, which was also given evacuation orders during Tuesday’s attack, have left the island for the mainland. Roughly 120 islanders have left Daecheong and Socheong Islands since the attack.

Although some residents have said they will return after the joint Korea-U.S. military exercise to be launched Sunday off the west coast, it is uncertain whether they will.

Many of the Yeonpyeong residents that have evacuated are enraged by the confusion at the time of the attack, with no emergency plans in place to protect the citizens on the island despite the roughly 1,000 marines based there. After the first shellings, local witnesses reported that they were merely given orders to take cover in dugouts, many of which are dilapidated and in need of repair.

Residents are also complaining that they had never been given information or instructions from the military, police or civil servants on how to evacuate if a war were to break out.

Some residents have said that once the evacuation order was given after the military barrage ceased, a request to the military for boats to evacuate on was denied. Several residents said they left the island on their own fishing boats.

And there’s more, they say.

“The soldiers are trying to hold the Yeonpyeong people hostages,” said one islander, who claimed that residents felt they were being held captive by the South Korean military when they lived on the island to prevent sudden North Korean provocation.

Many believe North Korea will strike again during the joint military exercise this weekend, after seeing North Korea blame South Korea for firing first through their state media.

Bad sentiment is also brewing among the evacuees because some of them believe the South Korean military only fired 30 rounds, while Yeonpyeong Island was being pummeled by North Korean shells.

The South Korean military said it fired 80 rounds against the North with six howitzers on the island. But it later corrected itself, saying that only three guns were operated during the attack.

Meanwhile, Ahn Yang-ho, second vice minister of the Ministry of Public Administration and Security, announced yesterday that the South Korean government would cover all medical treatment as well as the cost of rebuilding the houses on Yeonpyeong Island, because the situation is a “quasi-state of war.”

Twenty-five civilian homes were destroyed while six were badly damaged as of yesterday, with six public buildings also reduced to rubble. Eighteen civilians were wounded in the attack, not including the two who were killed.