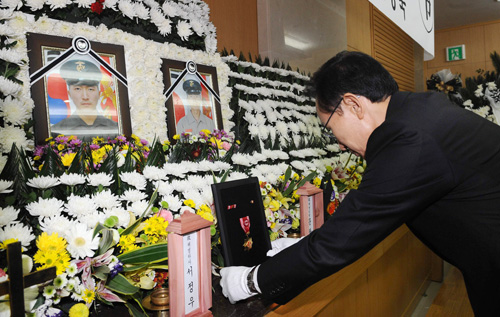 The families of the 46 sailors killed in the Cheonan sinking in March yesterday called for the South Korean government to redefine North Korea as the South’s main enemy.

The term “main enemy” was introduced in the South Korean Defense White Paper in 1995, and was removed under President Roh Moo-hyun in 2004.

The wording became: “North Korea still remains a direct threat to our security.”

In a statement denouncing the North’s artillery attack on Tuesday, the families said: “We deliver sincere condolences over the deaths of the two young marines Sgt. Suh Jeong-woo and Private Moon Gwang-wook as well as the civilians.”

“We feel intolerable anger in that such an incident happened only eight months after the sinking of the Cheonan.”

Regarding the Yeonpyeong shelling, the families described it as “not only a challenge to security and the sovereignty of South Korea but a crime against humanity because they killed civilians.

“The provocation reconfirmed the fact that North Korea is most dangerous to the security of the South, so we should clarify and redefine the concept of the main enemy.”

Meanwhile, more than 7,000 citizens visited a mourning altar for the marines yesterday, the last day of the mourning period.

Among the mourners were a dozen Yeonpyeong residents who had evacuated to Incheon.

President Lee Myung-bak visited the funeral parlor at the Armed Forces Capital Hospital to pay his respects to the deceased marines’ families yesterday morning. Lee wrote a condolence message: “[The government] will make the noble sacrifice into a cornerstone for the strong security of South Korea.” The president also visited wounded soldiers.

At Cheonggye Plaza in central Seoul, about 70 conservative university students held a candlelight vigil last night to mourn the loss of the two marines and two civilians.

Kim Geon-woo, 20, a student at the Catholic University of Korea, eulogized the two marines: “We ask for thorough action [by the government] as there should be no further tragedy for young students.”

Kim also said, “Not to make their sacrifices die in vain, we will shoulder their burden together.”

Also yesterday, the Korea Alliance of Progressive Movements held a press conference in front of the Yongsan garrison to protest the aircraft carrier U.S.S. George Washington’s participation in a South Korea-U.S. joint military exercise scheduled to begin on Sunday.