Most successful Asiad ever for Korea

Most successful Asiad ever for Korea

Highlights of the 16th Asian Games are shown on giant screens as the flame is extinguished during the closing ceremony in Guangzhou, China on Saturday. [YONHAP]


Korea completed its most successful Asian Games ever on Saturday by grabbing 76 gold medals and coming in second overall in the medal standings.

Korea was able to exceed its initial goal of 65 gold medals and finish second overall for the fourth consecutive Asian Games.

On the final day of competition, Ji Young-jun added Korea’s last gold in the men’s marathon with a time of two hours, 11 minutes and 11 seconds in the 42.195-kilometer race on Saturday. Korea’s once dominant marathon program had been struggling in recent years. 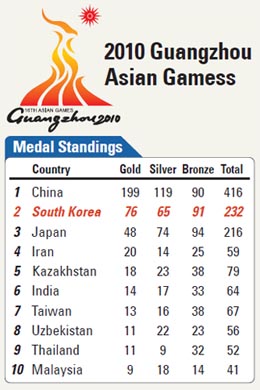 Up against defending Asian Games champion Mubarak Hassan Shami of Qatar and Yukihiro Kitaoka of Japan, Ji was not projected as one of the favorites to reach the medal podium. Ji started strong and maintained his pace with the leaders’ pack until getting his feet tangled with Shami at the 33-kilometer (20.5 miles) mark. Ji went onto distance himself from the rest of the pack in the final 8-kilometer stretch of the race.

“I trained and competed harder because of my wife and my son,” said the 29-year-old distance runner who got married last year. “I was able to win a gold medal because of my family.

“To be honest, I was concerned leading up to the race since I had the tendency to struggle in international competitions in the past. I prepared well and did not tire even towards the end of the race.”

At the 2006 Doha Asian Games, Park Jae-myung was the lone Korean gold medalist in an athletics event, the javelin. Korea wasn’t expected to have a strong showing in Guangzhou after a poor performance last month at the National Sports Festival in South Gyeongsang last month. 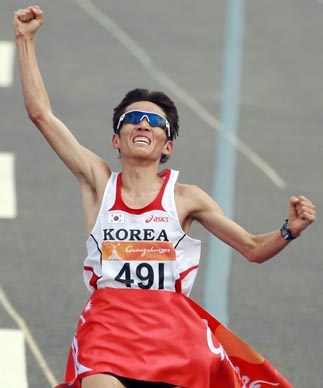 Ji Young-jun celebrates after winning the gold medal in the marathon at the Asian Games. [YONHAP]

But Korean athletes exceeded expectations, with Jung Soon-ok and Kim Deok-hyeon winning both the women’s and men’s long jump events, and Lee Yeon-kyung adding another surprise gold in the women’s 110-meter hurdles.

The shooting team reaped the most medals, bringing in a total of 13 golds. The success of the national shooting team can be attributed to an increased number of coaches and overseas training starting in 2003 with the goal of defeating China.

In swimming, Park Tae-hwan recovered from his lackluster performance at the 2009 Rome World Championships to make a clean sweep of the short- and mid-distance freestyle events with gold medals in the 100-, 200- and 400-meter. Jeong Da-rae added a surprise gold in the women’s 200-meter breaststroke.

Tough training camps proved to have paid dividends for the national bowling team, which won eight out of 13 total gold medals in the event. The fencing squad also had an impressive tourney with seven golds.

The national judo team, which struggled at the 2010 Tokyo World Championships in September, earned six gold, three silver and five bronze medals to finish ahead of powerhouse Japan.

Korea has traditionally fared well in events like taekwondo, boxing and wrestling but finished far short of expectations in Guangzhou. The national taekwondo squad, which was aiming for six gold medals, settled at four. Korea failed to earn a single gold medal in boxing or wrestling. The national boxing squad won two bronze medals while the wrestling team failed to win a gold at the Asian Games for the first time since the 1982 New Delhi Asiad.