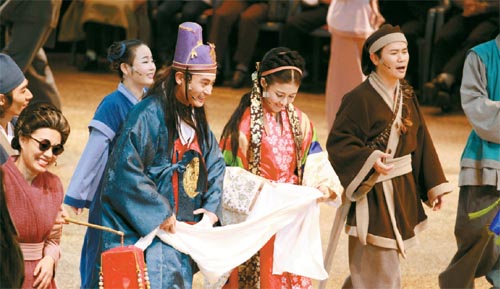 
Galileo once said, “You cannot teach a man anything, you can only help him discover it in himself.” The quotation could be the moral of the beloved Korean folktale “Princess Pyeonggang and the Fool Ondal.”

You can see this story brought to life at Jangchung Gymnasium, where it is being presented to celebrate the 30th anniversary of MBC’s Madang Nori.

A “madang nori” is a musical in the traditional Korean style, in which the performers sing and act while interacting with the audience. Audience members participate in the show by clapping to the beat, singing along and sometimes even going on stage. According to MBC producer Oh Jae-min, MBC created its version of Madang Nori in 1981 to help keep Korean traditional performing arts alive.

They chose to recreate Pyeonggang and the Fool Ondal for their anniversary because they thought it would have a broad appeal.

“This story is like a Korean ‘Romeo and Juliet’ because everyone grew up hearing it,” Oh said. “Usually, only people from the ages of 40 to 60 like Madang Nori, but we wanted to attract the younger generation as well because it is part of our culture.”

Princess Pyeonggang and the Fool Ondal is a traditional love story that takes place during the Goguryeo Dynasty (37 B.C. ? 668).

The story starts with a beautiful princess named Pyeonggang who cries all the time. To try to get the princess to stop crying, the king tells her that he will marry her off to the fool Ondal if she doesn’t stop. The king isn’t serious about the threat but the princess takes him at his word and leaves the kingdom to marry Ondal. To her surprise, she discovers that Ondal is actually not a fool and she decides to help him become a skilled warrior. One day, Goguryeo’s enemies attack and Ondal leads his village into battle and wins. Through this, the king acknowledges Ondal as his son-in-law and takes his daughter back into the kingdom.

Although this version is based on the original story, the MBC version contains a few hilarious plot twists that keep the audience laughing.

In one scene, Pyeonggang hires the narrator to train Ondal as a soldier. The narrator has Ondal carry out four tasks: do push-ups, carry a tombstone, chop a piece of wood in half with his bare hands and learn how to use a sword. Unfortunately, Ondal is much better at the tasks than the narrator is.

When I first stepped foot into Jangchung Gymnasium, it didn’t feel like I’d come to watch a musical. It felt more like storytime at a library, where the librarian reads a book in the middle of the room and the children gather around her. In the gymnasium, there are chairs surrounding the stage in a circle and the cast performs in the middle. This setup helps the performers interact with the audience.

In one scene, Pyeonggang’s stepmother talks about how much she wants her good-for-nothing son to be king and asked a woman in the audience, “Isn’t your son like mine?” The woman answered as if on cue, “Nope. My son is way better than yours.”

But the best part came toward the end of the performance when the audience was invited on stage with the king to celebrate the return of Princess Pyeonggang and Ondal. A samulnori (Korean percussion ensemble) group played and everyone danced and sang. With actors and audience members putting their arms around each other, it was a touching and memorable moment.

The musical is directed by Min Bok-gi, who directed musicals such as “Hello Francesca.” He added some of the twists in the musical.

“The original story is very vague and short, but we wanted to make the story more memorable by imagining Ondal and Pyeonggang meeting through fate and by including the evil stepmother,” Oh said.

And it is memorable, thanks to engaging performances by the talented cast, which includes stars from Korean dramas, musicals and movies.

Actor Won Ki-jun, who played Jumong’s evil half-brother Prince Yeongpo in the television drama “Jumong” (2006), plays the fool Ondal. Although he was a strong antagonist as Yeongpo, his Ondal is a sweet and innocent fool who becomes a charismatic warrior.

Princess Pyeonggang is played by Korea’s queen of musical theater, Ahn Yu-jin, who was in the musical “Daejangeum.” Ahn is funny as a princess who is poised and perfect one moment and comically human the next.

But the person who steals the show is comedian Kang Sung-bum, who plays the narrator. Famously known as “Suda [talkative] man” in the entertainment industry, he had the audience rolling on the floor with his jokes. He is also key in connecting the audience with the performers.