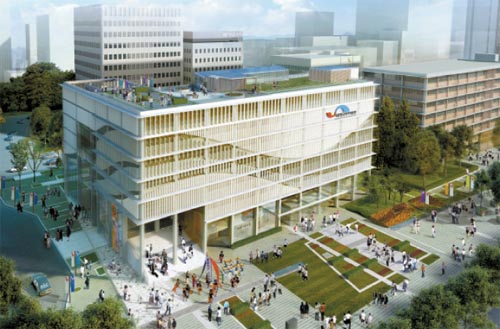 Concept art for the new National Museum of Korean Contemporary History shows what the building will look like when it is finished in February 2013. Provided by the Committee for the Establishment of the Museum


Construction on the National Museum of Korean Contemporary History began last Thursday with a groundbreaking ceremony attended by Prime Minister Kim Hwang-sik and Minister of Culture, Sports and Tourism Yu In-chon. When finished, the new museum will document the path Korea has taken over the past century, beginning with the period after Japan’s annexation of Korea.

The new museum will be built on the site of the former Ministry of Culture building in Gwanghwamun, across from the Sejong Center for the Performing Arts and next to the U.S. Embassy. The museum is scheduled to open in February 2013 and the project is expected to cost 48.4 billion won ($41.8 million). The Culture Ministry already moved to Daehangno in northern Seoul.

The building is part of a national project to transform the Gwanghwamun area into a place for Korean heritage. That project, which began in 2002, also includes the recent restoration of Gyeongbok Palace and Gwanghwamun, the palace’s main gate, and the opening of Gwanghwamun Plaza, where statues of King Sejong the Great and Admiral Yi Sun-sin stand.

The new museum will be based on the idea that Korea’s rapid development has been achieved through the unceasing effort and sacrifice of the entire nation rather than on the leadership of a selected few.

The exhibitions will be categorized into four themes: the period prior to the establishment of Korea as a state, the birth of the Republic of Korea, Korea’s growth and development and Korea’s future.

The first section will show the Japanese annexation period, as the nation strove to achieve independence. The second section includes the Korean War and Korea’s effort to restore its economy and establish new laws. The third section demonstrates scientific developments and the fight for democracy. The fourth section shows how Korea is reaching out in the global community with cutting-edge technology and the hallyu, the Korean wave.

Despite these plans, there is still some dispute about exactly how the museum will distinguish itself from existing museums. The National Museum of Korea already has displays on Korean history and culture from ancient to modern times, and the War Memorial of Korea documents the country’s involvement in military affairs.

Kim Jin-hyun, chairman of the Committee for the Establishment of the Museum, responded to concerns about the museum’s mission at a press conference on Tuesday, two days ahead of the groundbreaking ceremony.

“Although we have a tentative plan, we are continuing to do research on history and the arrangement of the artifacts to include as much information as possible in a limited space,” Kim said.

There are also concerns about the space, which is about 6,500 square meters (about 70,000 square feet). Some worry that the museum won’t be able to accommodate a large number of visitors in addition to the high-tech displays planned for the space.

“We planned the entire process thinking that we would also use the current U.S. Embassy site as soon as it moves to Yongsan,” said Kim. “But since there is no agreement yet on when the embassy will move, we will use the first building for regular exhibitions and will use the annex for special exhibitions.”