SIWA bazaar reaches out to needy

SIWA bazaar reaches out to needy 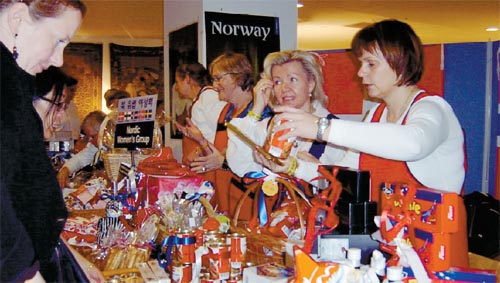 
When wives follow their husbands to Korea when they come here to work, they often have trouble pursuing their own careers here because of visa issues or the language barrier. The solution for some is to shift their focus to volunteering in a way that allows them to use their professional expertise. Such opportunities used to be only readily available for Korean speakers until the Seoul International Women’s Association was established in 1962.

SIWA, which initially started out as a small group of international and Korean women 48 years ago, now has over 1,000 members. It’s mission is to support those in need in this country as well as to enhance expat life here.

The volunteers who run SIWA get extremely busy at the start of every year as they gear up for the group’s annual year-end SIWA and Diplomatic Community Bazaar, the organization’s biggest event, which happens tomorrow. SIWA annually raises over 200 million won ($174,400) through the event, which benefited over 50 charity organizations last year.

In a recent interview with the Korea JoongAng Daily, three senior SIWA members said some people mistake SIWA for a luxury social networking club for expat women who occasionally meet for a cup of coffee and a light-hearted chat, but Michaela Ratcliff, the group’s Welfare Chair begs to differ.

“It’s a serious business,” she said.


Groups of two to three members visit four to five local charity organizations per month and they normally spend between two hours and a whole day collecting information on the charities.

“For me always as a welfare chairperson, the biggest deciding factor is that I want to see support that’s empowering people,” Ratcliff, a German expat, said. “It can’t just involving giving something, but it has to be empowering, forward-oriented motion for charity. We have many charities that we have supported throughout the year and we are amazed at the leaps they have made.”

SIWA members must visit a new charity before any donations are given, members explain. The visited charity organizations include centers for disabled children, sexually abused women, single moms and HIV patients.

“The charity presents information about its financial information, their daily activities, the problems they have, and what are they requesting of us,” Ratcliff said.

She said sometimes the discussions on which charities to support are “very animated” because some might believe that a charity is a worthy cause, while others disagree.

“From helping people, I learn a lot,” said Ki Wha-sook, a senior member who has been involved in SIWA activities for over 30 years. “Trips to charities come out of our own expenses. SIWA doesn’t pay for this. As part of our volunteer work, we like to pay for our own trips. All our collected funds go directly to the charity and they are not used for our SIWA members in any other way.”

Ratcliff said a particularly memorable contribution the group has made was a new van for an Italian Roman Catholic priest last year.

Father Fincenzo Bordo began running Ana’s House in 1992 in Seongnam, Gyeonggi, feeding 30 to 40 homeless people a day. Word of his activities spread quickly and he now provides food for 400 homeless people every day, according to Ratcliff.

Though he gets food donations and other sorts of help from volunteers, the old van he used for collecting food and going to market broke down. He ended up stranded on the side of road in the middle of a roasting hot summer day, and he had to call taxis to bring boxes of food back to Ana’s House.

“We felt this was a worthy cause and we were able to buy him a new van. It was just a tremendous experience,” Ratcliff said. “We had to take a picture of him with his old van because he was kind of emotionally attached to the van and he didn’t want let it go.”

When asked why foreigners who don’t speak Korean want to engage in helping others here, Ratcliff said she and others have a desire to reach out to the people in their immediate community.

“Every human being has a responsibility to contribute in a meaningful to society no matter where we are,” Ratcliff said. “I think globalization only occurs, thrives and prospers when we’re able to communicate in this way, one hand holds another and one heart touches another regardless of language. I will definitely bring back what I learned.”

“Thanks to these companies, SIWA has been able to continue its tradition of empowering the needy to stand their own feet and assisting charity leaders,” Kim said.

SIWA will host its 32nd annual bazaar on Tuesday, Nov. 30, at the Grand Hilton in Seodaemun District, Seoul. The proceeds will go to Korean charities across the country.

Over 50 embassies, women’s clubs, charity groups and other vendors are scheduled to participate in the bazaar, selling handmade crafts, food, wine, antiques, clothing, entertainment pieces and other treasures from around the world.