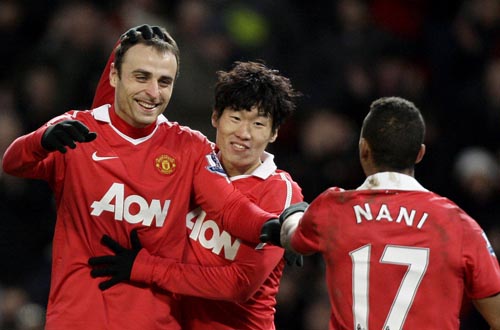 
MANCHESTER, England - Dimitar Berbatov admitted even he was surprised with his amazing five-goal haul as Manchester United humiliated the Blackburn Rovers 7-1 at Old Trafford.

Berbatov was virtually unstoppable against a woeful Rovers side and he gave United the lead after just 72 seconds on Saturday.

A Park Ji-Sung finish and a further Berbatov strike gave United a 3-0 halftime advantage before they piled on the misery even further.

The Bulgarian grabbed his hat-trick after just one minute of the second half, finishing off a move he had started as he thrashed Nani’s cross home before Nani then made it 5-0 as he also netted just 90 seconds later.

Berbatov soon had his fourth as a Park shot was blocked but the rebound fortuitously fell to the striker as he powered in from close range before then grabbing his fifth, and United’s seventh, as his narrow-angled finish beat the dive of Ryan Nelsen and goalkeeper Paul Robinson.

Chris Samba grabbed a late consolation for Rovers but their humiliation was complete as Berbatov became just the fourth player since the inception of the Premier League to score five goals in one encounter following in the footsteps of Andy Cole, Alan Shearer and Jermain Defoe.

“I don’t think anybody could have guessed the score line,” Berbatov said. “It was a great team performance. In the end I’m pleased with the performance and the goals I scored. Personally I was very impressed with myself.

“I’ve scored five before but it was a long time ago back home. To do it in the Premier League when only four other players have done it, to stand next to Shearer and Andy Cole is a great honor.”

Berbatov had not scored for United since scoring a hat-trick against Liverpool on Sept. 19 but his five goals sent him to the top of the Premier League scoring charts. He admitted that his barren run had started to cause him sleepless nights, so he was delighted to help United put pressure on title rivals Chelsea.

“I was a little bit worried,” Berbatov added. “When you are a striker, people tend to only look at the goals you score.

“For me, it is more about how I play, the assists I give, how I link with other players - but today I scored so I am very pleased.

Rovers barely got their foot on the ball and Berbatov could have made it 8-1 if not for a great save from Robinson in the dying seconds.

“It won’t be an easy one to forget but it’s one we will have to try and put behind us,” Rovers manager Sam Allardyce said. “We were completely outplayed from the 72nd second onward.

“I’m disappointed with the way the team has gone under but I have to give credit about how ruthless United were.”