Reason to leave, thanks to the North

Reason to leave, thanks to the North 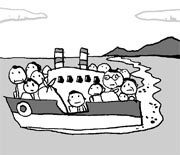 When potatoes were first imported to Europe from South America, Europeans studied ways to grind potatoes to make bread. Unlike wheat, potatoes do not have gluten, so they thought potatoes were not suitable for bread-making. Therefore, they first used potatoes to feed their horses. There was a rumor that you could get leprosy if you ate potatoes, so the vegetable was avoided by many Europeans at first.

The first country to break the taboo was Ireland. After the English ruling class had taken away the most fertile farmland, landless Irish farmers had no choice. They had to find a crop that would bring the biggest harvest possible in the small, barren land. The solution was the potato. The Irish baked and mashed their potatoes, and by the mid-19th century, Ireland’s population had tripled to grown to 8.2 million in a century. But when a plant disease called late blight spread over the potato fields, the Great Irish Famine ensued, with over 1 million people dying of starvation and several million leaving.

Whether to stay and die of starvation or leave the country was often a life-changing decision in Ireland at that time. In the 1930s, 50s and 80s, whenever an economic slump hit Ireland, massive emigration ensued. Ireland saw its worst economic crisis this year, and the largest number of citizens since the 1980s left Ireland for Australia, the United States and Canada. Now Korea is also a popular haven, as native English teachers are in high demand.

While the Irish came to Korea in search of jobs, many Koreans leave their country because they are tired of subpar public education and soaring private education expenses. This “education exodus” slowed a bit after the financial crisis of 1997, but over 160,000 elementary, middle and high school students have studied abroad since 2000. If you count the families that emigrated for education, the actual number of participants would be even greater.

Residents of the five islands in the Yellow Sea are leaving their homes after the Yeonpyeong Island attack. Just as the plant disease in Ireland forced people out of that country, the hostility of North Korea has driven Yeonpyeong residents away from their homes. It is sad to see them crying after losing so much. It is even sadder to hear that Japan and the Philippines already have plans to evacuate their citizens. Dissatisfaction with education along with worsening security anxiety may soon see Korea get caught in an exodus trap, just as Ireland once was.