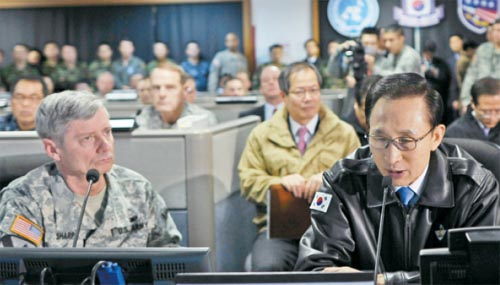 
President Lee Myung-bak vowed yesterday that South Korea will deal with North Korea in a wholly different manner - with fewer words and more action - judging that tolerance toward the belligerent regime has proved ineffective.

Lee said that the South does not believe the North will give up its nuclear programs and military brinkmanship on its own and warned that the North will pay a price for any further provocations toward the South.

Lee’s stern words, his first public address since the Yeonpyeong attack, were made as Seoul and Washington entered the second day of one of their biggest joint military drills in a show of force against the North.

The remarks and the drill follow a series of provocative actions by the North, including the deadly shelling of a South Korean island last Tuesday.

“I can’t stop feeling regret for the loss of innocent lives of our people and the destruction of the people’s livelihoods,” said Lee during a televised public address, referring to the North’s attack on Yeonpyeong Island. Lee said he takes responsibility for not preventing the attack from happening.

Apart from marines Seo Jeong-woo and Moon Gwang-wook, two construction workers - Kim Chi-baek and Bae Bok-cheol - were killed in the shelling, the first attack by the North on civilian land in the South since the end of the Korean War. More than 20 buildings were destroyed.

Lee paid tribute to the casualties, somberly mentioning the names of the four killed. Then he shifted to an angry tone.

“Launching a military attack on civilians is such an inhumane crime that it is prohibited even in a time of war,” he said. “Students were studying only 10 meters [33 feet] away from where the shells landed. I cannot but be enraged by the cruelty of the North Korean regime that does not care about lives.”

Lee said South Korea has strived to engage North Korea through dialogue and cooperation over some 20 years, in particular over nuclear issues, but that strategy has only resulted in the North’s nuclear development, the torpedoing of the South Korean warship Cheonan and the shelling of Yeonpyeong.

It is difficult to expect the North to voluntarily give up its military adventurism and nuclear programs, he said.

The Yeonpyeong attack has “clearly taught the South Korean public that patience and tolerance only trigger a bigger provocation,” Lee said. “We will make sure that the North will pay the due price for a provocation.”

Lee’s words followed China’s proposal on Sunday of a meeting among representatives of the stalled six-party talks, which was proposed just hours after Lee’s reception with Chinese State Councilor Dai Bingguo in Seoul. China says resuming the talks could lead to easing of tensions on the Korean Peninsula, which Seoul doubts.

Lee’s address came as the president has been dogged by criticism for lapses in the military’s response to the Yeonpyeong attack. The South fired about 80 artillery shells in response to around 170 shells from the North, but the first counterfire occurred about 13 minutes after the North started shelling.

After the attack, Lee accepted the resignation of Minister of National Defense Kim Tae-young, a move many in the South believed was long overdue after the Cheonan incident in March, which killed 46 sailors. Lee also ordered the government to consider sharpening the rules of engagement.

Answering lawmakers’ questions at the National Assembly yesterday, outgoing Defense Minister Kim said the government will revise its rules of engagement to allow the country’s Navy and Air Force to immediately respond to a North Korean attack.

Lawmakers said yesterday that the military also requested a 18.5 percent increase in the military budget to defend the five western border islands, including Yeonpyeong.

“Staging a war practice even mobilizing a nuclear-powered aircraft carrier reveals their intention to invade the North and their belligerence,” a Rodong Sinmun editorial said, referring to the 97,000-ton U.S.S. George Washington, which has been mobilized in the Yellow Sea. “It is an intentional and planned maneuver to bring an already sensitive situation all the way to the phase of the break-out of an all-out war.”

The Joint Chiefs of Staff said apart from the George Washington, about 10 warships and 7,300 troops from South Korea and the U.S. were participating in the “high-intensity” joint exercises yesterday. The drill is to proceed until tomorrow.