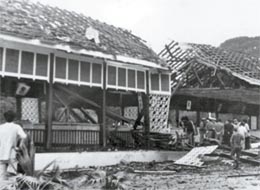 The structure of the mausoleum for Burma’s independence hero Aung San was destroyed by bombs planted there by North Korean agents in Rangoon. The blast killed 17 senior South Korean government officials. 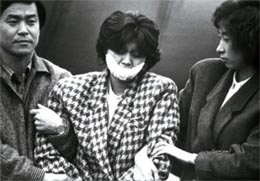 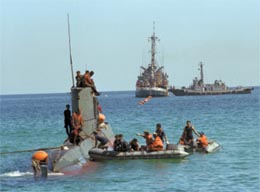 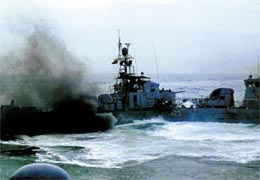 The South Korean warship Cheonan was sunk by a North Korean torpedo attack, killing 46 sailors aboard. 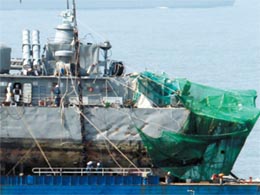 “We have endured North Korea’s provocations time after time.”

President Lee Myung-bak addressed the nation yesterday morning in an effort to reassure citizens who were shaken by the attack on Yeonpyeong Island last Tuesday, which killed four people, including two civilians.

And, South Koreans, especially the president, remember those events.

“Through the Blue House raid in 1968 and the 1983 Rangoon bombing, the North Korean regime has already aimed for the South Korean head of state twice,” said Lee. “And 115 citizens lost their lives because of a civilian aircraft explosion in 1987.”

As Lee mentioned during his address, North Korea has orchestrated numerous acts against South Korea since the Korean War ended in a truce in 1953.

According to a report in June by the Freedom Advance Association, a liberal civic group based in Seoul, there have been roughly 470 cases of North Korean provocations against South Korea since the Korean War, with 3,700 people kidnapped, wounded or killed.

A chronology of North Korean provocations released by the U.S. Congressional Research Service in 2003 showed that North Korea infiltrated South Korea with 3,693 armed agents from 1954 to 1992.

These provocations, many of which have proved dangerous and even fatal, can largely be categorized into five groups, experts say: military attacks, aircraft hijacking, assassination attempts, guerilla attacks and kidnapping.

North Korea has frequently threatened the South Korean military with its warships and submarines. The most recent clashes between North and South Korea that resulted in South Korean casualties were the Yeonpyeong sea battles in 1999 and 2002.

The sinking of the South Korean warship Cheonan in March killed 46 sailors after North Korea, according to reports, torpedoed the ship, which the North denies.

North Korea has tried its luck in the air as well. On Nov. 29, 1987, a Korean Air Boeing 707 heading to Seoul from Baghdad blew up over the Andaman Sea, killing 95 passengers and 20 crew members.

A young North Korean woman named Kim Hyon-hui admitted to stowing explosives in the overhead compartment of the plane during a stopover in Abu Dhabi.

In December 1969, a Korean Air plane carrying 51 passengers and crew was hijacked by North Korean agents and flown into North Korean territory. Only 39 passengers were released and the rest are still believed to be in North Korean custody.

The communist state has not stopped at civilians, but has also aimed for South Korean presidents in the past, starting with the attempted Blue House raid in January 1968 by 31 armed North Korean agents.

Upon being stopped by guards near the Blue House, the agents opened fire, killing 18 South Koreans in the process. Twenty-eight North Korean agents were killed on site while two managed to escape. One was captured alive.

The second assassination attempt was the infamous Rangoon bombing, which was an attempt to assassinate then-South Korean President Chun Doo Hwan on a trip to Rangoon, Burma. Although the former president managed to avoid being killed by getting stuck in traffic, 17 South Korean ministers and officials died after bombs installed at a mausoleum where the president was planning to visit were detonated.

In continued infiltration attempts, 14 communist guerillas were killed and one was captured in September 1996 after a North Korean submarine ran aground in Sokcho, South Korea.

Another North Korean submarine was found caught in nets near the same area two years later, where nine guerrillas were found dead.

Amid assassination and terrorism attempts, North Korea has repeatedly kidnapped South Koreans since 1955, when 10 South Korean fishermen were taken from their boat.

A broadcasting ship that belonged to the South Korean Navy was also hijacked near Yeonpyeong Island in 1970, along with another fishing boat in 1987.