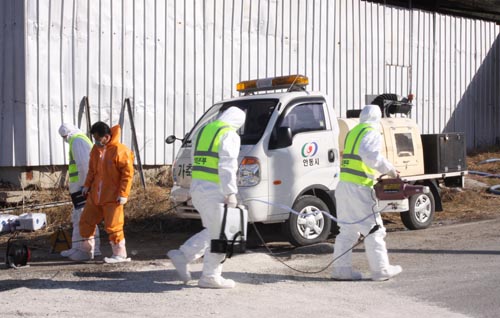 
Foot-and-mouth disease has been found at two hog farms in Andong, North Gyeongsang, the government said yesterday, less than two months after Korea was declared clear of the disease that affects cloven-hoofed animals, such as pigs and cows.

The National Veterinary Research and Quarantine Service said that it inspected the two farms yesterday after their owners reported the cases at the quarantine service on Sunday and the test on the disease turned out to be positive.

The Ministry of Food, Agriculture, Forestry and Fisheries ordered North Gyeongsang to restrict the movement of people and livestock in the area where the disease broke out.

Under foot-and-mouth disease guidelines, the province is required to do disinfection work on the area and slaughter all swine raised in the two farms as well as those within close proximity.

People in the two farms will be prohibited from leaving the farms unless they are sanitized.

Inspectors of the quarantine service were dispatched to the area and are conducting epidemiology studies.

The quarantine service declared an area within a 3-kilometer radius from the two farms as “dangerous” and said that some 23,000 heads of animals within the boundary will be culled to prevent any spread of the disease.

All farms within a 20-kilometer radius will be banned from selling or removing livestock from the area, the ministry said.

The ministry also asked provincial offices to strengthen disinfection work and advised livestock farmers not to hold meetings or leave the country.

Korea reported the last outbreak in April on Ganghwa Island, after reporting its first outbreak of the disease in January in Pocheon, Gyeonggi, since 2002. The country was cleared of the disease on Sept. 27 by the World Organization for Animal Health.