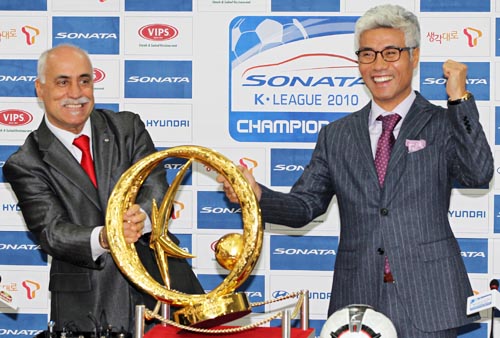 
A lengthy season that began in late February will come to a close this week and a new club will be anointed champion. FC Seoul and Jeju United are going duel on the pitch in the two-part, home-and-away K-League championships.

FC Seoul will attempt to live up to its regular-season record - the best in the K-League - while Jeju United will have to overcome some tough challenges in order to win the title.

As the top-seeded club in the K-League Championship playoffs, FC Seoul finished the regular season with a record of 20 wins, two draws and six losses to reach its third consecutive finals. But the team has not played a game since its final regular season match on Nov. 7. And as the favorites heading into the series, they are facing heavy pressure to win the title.

“I congratulate Jeju for reaching the finals,” FC Seoul manager Nelo Vingada said at a press conference on Monday. “As the two top clubs in the K-League this season, both teams deserve a shot at the title.”

Jeju United - which finished the season with a record of 17 wins, eight draws and three losses - is coming off a 1-0 win over Jeonbuk Hyundai Motors, the defending champions. 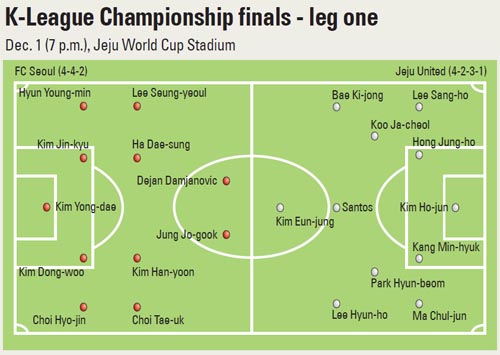 This is the first time Jeju has reached the finals in 10 years. The underdogs are also trying to become the first second-seeded team to win the K-League Championship title since the current six-team playoff format was introduced in 2007.

In order to have any shot at upsetting FC Seoul, Jeju United will have to win tonight. Eight of the nine teams that have won the first game of the series have gone on to win the championship title.

“It’s an honor to face a club like FC Seoul in the finals,” Jeju United manager Park Kyung-hoon said.

FC Seoul is considered the stronger of the two clubs in the series with talented veteran players like Dejan Damjanovic, Jung Jo-gook, Choi Tae-uk and Choi Hyo-jin.

The 27-year-old fullback Choi Hyo-jin had plenty of experience winning championships with the Pohang Steelers, when his former team won the 2007 K-League Championship, the 2008 FA Cup and the 2008 AFC Champions League. Choi should have a stabilizing influence on defense and can also jump in on the attack.

“I would have to say FC Seoul - which boasts strength, height and better decision-making abilities - has the edge,” former national team manager Kim Ho said. “But having said that, FC Seoul will have to be wary of Jeju’s long-range shots.” 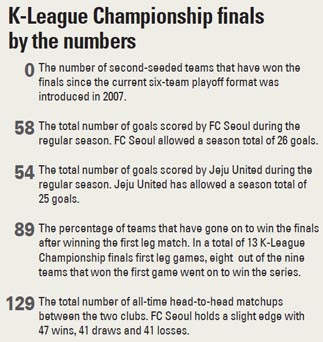 “FC Seoul has players with better decision-making and scoring abilities and should come out on top,” he said.

Park Hyun-beom of Jeju United is a 6-foot-4 23-year-old midfielder with deft dribbling skills and a potent long-range shot. Because teammate Koo Ja-cheol’s status for tonight’s game is still uncertain after he suffered a calf injury in the semifinals, Park will be expected to come up big.

“Jeju players have solid fundamental skills but lack the ability to penetrate the opposing defense,” Huh said. “If Santos and Danilo Neco are contained, Jeju will have a difficult time creating much on offense.”