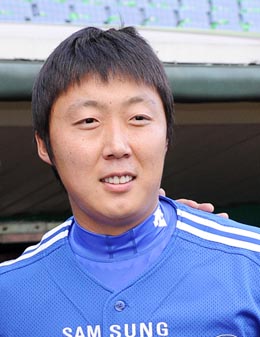 Free agent pitcher Bae Young-soo is excited about the prospect of playing for the Yakult Swallows in the Nippon Professional Baseball league next season.

The 29-year-old veteran right-hander earned free-agency status at the end of the 2010 postseason. He stopped negotiating with his former team, the Samsung Lions, in late October.

Bae departed for Tokyo on Monday and entered negotiations with the Swallows yesterday. The Swallows recently reached a three-year 1.5 billion yen ($17.8 million) contract with Korean closer Lim Chang-yong. Bae is the second major free agent on their list.

According to sources, the Swallows have tabbed Bae as an ideal candidate for the fifth spot in their starting rotation next season. The two sides have already reached a general agreement and are said to be ironing out the details of the contract. A deal is expected to be finalized by the end of the week.

“After undergoing surgery on my throwing elbow in January 2007, critics doubted my chances of fully recovering from such a major surgery,” Bae said. “I tried to push myself, but I realized after hitting rock-bottom that I needed a change of direction in my career. I could tell that my arm was feeling better, but many people didn’t see it that way. That’s part of the reason why I feel I need a new challenge in my life.”

Having been drafted in the first round by the Samsung Lions in 2000, Bae would have the best year of his career in 2004. He finished the season with a 17-2 record and a 2.61 ERA. Bae led the league in wins and win percentage that season and would go on to earn the Most Valuable Player and Golden Glove Award.

Bae went through some tough seasons after undergoing surgery to repair his damaged right elbow in 2007. He went 9-8 with a 4.55 ERA in 2008 and 1-12 with 7.26 ERA in 2009. The veteran right-hander was largely written off, but he had a respectable season in 2010, going 6-8 with a 4.74 ERA. He showed poise and solid command of his pitches for the Lions in the postseason. Bae’s performance in the playoffs drew interest from several NPB clubs, including the Swallows.

“There were so many people who doubted my chances of becoming a successful pitcher in the NPB that it actually served to motivate me,” Bae said. “Whether I succeed or not, I wanted to test myself in a bigger league. With others having low expectations for me, I think it’s a good idea to set high goals for myself. Hopefully, I can have a successful season like the one I had back in 2004.”

Bae is close to signing a contract with the Swallows, but he also has another reason to be upbeat these days. He is set to marry his fiancee Park Sung-hee, a former Miss Korea contestant and actress, on Dec. 19. The two have been dating for six years.

“She’s my biggest supporter at this point,” said Bae. “She told me to challenge myself while I’m still young.”