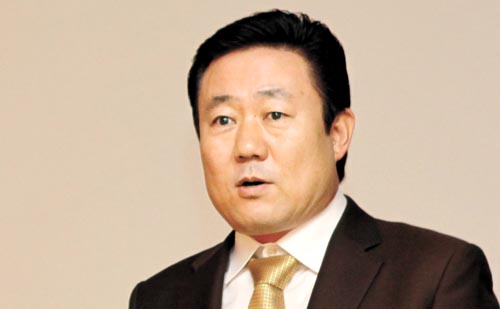 
The rapid economic, social and cultural development that has taken place in Korea over recent years has played a positive role for many overseas businessmen like Oh Sei-young, chairman and chief executive of Kolao Group, the largest private firm in Laos. In a recent interview with the Korea JoongAng Daily, Oh said that more Koreans should take notice of the growing business opportunities that emerging nations offer because of a growing middle class and increased consumption.


Q. How did you start your own business in Laos and what industries does your group specialize in?

A. It was during the late 1980s that I became aware of the business opportunities that Indochina, including Vietnam, could offer in the future. At that time, I was an employee working for Kolon Corporation and was in charge of promoting overseas market research, including Vietnam.

As Vietnam was on the path of going from a socialist to a free-market economy and opening its doors to the world, I became aware of the opportunities to promote business there. Since a country like Vietnam doesn’t require much money to start a business, I decided to build a textile factory. (Oh graduated in textile engineering at Sungkyunkwan University). In the early 1990s, however, large Korean conglomerates started to take notice of Vietnam and established businesses. Unfortunately, I wasn’t ready to compete with them, so I moved to Cambodia, and then to Laos in 1997 and started selling cars and motorcycles. The Kolao Group specializes in manufacturing cars and motorcycles and is involved in other sectors such as electronics, distribution, construction and finance.

Currently, the Kolao Group accounts for nearly 40 percent of the country’s auto industry and 35 percent of the motorcycle industry. After little more than a decade since company’s establishment, the company has managed to grow into a group that now has seven subsidiaries - Kolao Developing, Indochina Bank, Kolao Farm & Energy, K-Plaza, Glovia, I-Tech and Kolao Resort.

What are some factors behind your success?

Like any other overseas businesses, establishing a strong brand image and taking into consideration the local environment is really important. Laos is a small country and it doesn’t have a well-established public transportation system. When people earn money, the first thing they want to purchase is a motorcycle, which the Kolao Group produces. For those who have more money, they buy a car, which we also manufacture. We sell what the people need most and aspire to. There are Kolao brand products everywhere in Laos.

What about some obstacles?

The obstacles that I’m going to talk about aren’t only limited to Laos but everywhere for firms trying to expand. The cultural and legal differences aren’t obstacles but mere preparation when establishing businesses overseas. The real obstacle based on my experience is resistance from the local privileged class. When a company grows, the privileged ones tend to intervene and try to block the success of the company, which is very difficult to overcome. Many companies fail as a result.

The key to overcoming this obstacle, though obvious, is to promote transparent business based on respect for the law. This is the key to long-term success.

Once the company is able to overcome this obstacle, and shows that it is transparent and without corruption, the company can become partners with local groups and expand its network.

For the Kolao Group, 2000 and 2001 were the most difficult to endure as many local groups and parties tried to make us fall. But we managed to overcome this by operating a transparent business, and now, we’re here. We’re welcomed in the country.

Who are your competitors in Laos?

Rather than mentioning specific names of firms - and this isn’t only for the Kolao Group but also for Korea - Korea is in between China and Japan, which makes it difficult to differentiate itself in overseas markets. Japan has key technologies and brand power while China is competent in terms of not only price but also quality nowadays. Even in Laos, Japan and China are the main competitors for Kolao Group.

We try to distinguish ourselves by creating a strong brand image, which help us win trust from the local people.

Based on what you said earlier on, there are business opportunities in Laos and other Southeast Asian nations. And the number of Korean businessmen going to the region and promoting businesses is increasing. Do you think many Korean businessmen are using the most of those chances?

Southeast Asian nations, including Laos and Vietnam, have a lot of growth potential. Farmers today have the potential to become consumers and a large middle-class group in the future. The market is big.

It is true that Korean companies are going overseas nowadays but not that many are entering into the Southeast Asian markets. The number is fewer compared to other countries like Japan and China. It’s because there is a lack of Korean production facilities in Southeast Asia.

Japan, on the other hand, has been expanding into the region since the 1960s and has built factories there.

They already have strong brand power based on localization. For example, in Thailand, Toyota is perceived by the people as being a Thai brand since 100 percent of the auto components used to manufacture the cars are all made in Thailand.