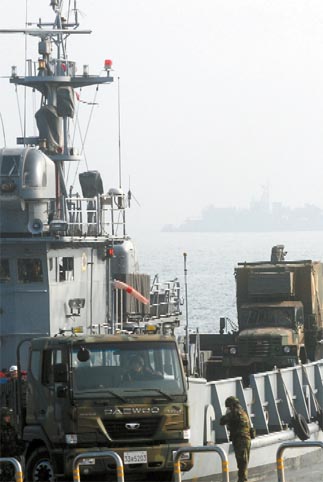 In an effort to beef up national defense in the aftermath of the Yeonpyeong attack, the Ministry of National Defense said it will make extensive changes to its rules of engagement and will bring in stronger weaponry for islands along the west coast. The ministry submitted a report yesterday to the National Assembly in which it detailed its plans, focusing especially on the “principle of proportionality” to “guarantee punishment of the enemy.”

Current regulations call for retaliating against enemy attack with the same number of rounds with an identical type of weapon. The ministry said that the weapons chosen in the future will be determined by the threat the enemy poses and the harm it has done. Along with the changes in the rules of engagement, the military is making sure it will have a wider range of firepower to choose from the next time North Korea stages an attack on South Korea’s west coast.

The ministry said it has installed a multiple launch rocket system (MLRS) on Yeonpyeong Island that can fire 36 130-millimeter rockets within 20 seconds, covering an area as large as four football fields in one firing. Six more K9 howitzers have also been installed on the island. And more firepower will be added in the days to come, the ministry announced, though it did not specify which types of weapons.

The ministry is also said to be considering installing 36 Delilah cruise missiles each on Yeonpyeong Island and Baengnyeong Island by 2012. The Israeli-made Delilah missiles have a firing range of 250 kilometers (155 miles) and can be used both on land and at sea. Once the missiles are installed, the military will be able to aim at North Korean targets inland, including Kim Jong-il’s palace complex in Pyongyang, which is about 100 kilometers from the islands.

But whether the missiles will be brought in is in question because some experts have said it would only bring more threats to the islands and their residents.

“To install missiles at the frontlines that can be fired from the mainland is meaningless. Yeonpyeong and Baengnyeong would become a target for North Korea’s scud missiles and not just for the [North’s] coastal artillery, threatening the safety of the people who live there,” said Shin In-kyun, head of the civilian group Korea Defense Network.

Meanwhile, to support the ministry’s military buildup, the National Assembly’s National Defense Committee increased the ministry’s budget yesterday by more than what the government had originally asked for. At yesterday’s committee meeting with outgoing Defense Minister Kim Tae-young, lawmakers increased the defense budget for next year by 714.6 billion won ($616.9 million) from 31.2 trillion won.

The committee also decided yesterday that an additional 455.6 billion won would be spent on defense within two years for the five islands in the west coast, including Yeonpyeong and Baengnyeong. The ministry said the funds would used to deploy over 1,000 additional marines to the region.