The final pitches for 2022 World Cup

The final pitches for 2022 World Cup 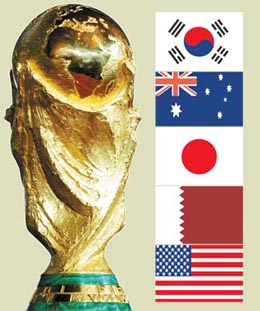 ZURICH - The scandal-tainted race for the 2018 and 2022 World Cups enters the home stretch here Wednesday as rival bidders make formal presentations to voters, with the crucial ballot just less than 24 hours away.

The five countries battling for the right to host the 2022 football extravaganza - Australia, the United States, Korea, Japan and Qatar - showcased their bids in presentations made at FIFA headquarters in Zurich on Wednesday. While the 2022 bidders prepare to make their final pitches, high-powered delegations from the countries slugging it out for the 2018 tournament will be engaging in frenzied last-minute lobbying.

The 2018 candidates will their presentations today and the 2022 candidates made their final pitches yesterday.

Here are the five bidders vying to host football’s World Cup in 2022.

Slogan: More than a game

* Korea proved its ability to host a major football event when it successfully co-hosted the World Cup with Japan in 2002 - the first time the showpiece tournament had ever taken place in Asia. The country has also organized the 1986 Asian Games, the Seoul Olympics in 1988 and the 2002 Asian Games.

* The Korean team reached the semifinals of the 2002 World Cup, earning the FIFA award for Most Entertaining Team that year, and its exuberant supporters helped to create an enduring image of a football-mad country.

* The country built a raft of new stadiums for the 2002 competition and much of the infrastructure needed for the 2022 event is already in place.

* FIFA President Sepp Blatter said recently that hosting the World Cup in Korea could help bring peace to the troubled peninsula, where Korea has been at diplomatic loggerheads with neighbors North Korea for decades. South Korea’s bid committee has proposed playing some games in venues in the North.

* Having co-hosted the tournament as recently as 2002, it may be felt that Korea has not waited long enough to host the event again after a gap of just 20 years.

* Fresh fears about security in the region were raised earlier this week when North Korea attacked the South Korean border island of Yeonpyeong. The resumption of hostilities raises doubts about South Korean bid chairman Han Sung-joo’s stated intention to involve North Korea in the organization of the tournament.

* The unparalleled opportunity Australia offers as a bridge between Asia and Oceania for FIFA to take the World Cup to the only continent that has never hosted it.

* Nine of the 12 stadiums for the World Cup already exist, with three stadiums to be built.

* Risk of a reduction in television income from Europe because matches would be shown very early in the day for European audiences. Matches would be screened in the middle of the night in the Americas.

* Australia’s vast size requires a dependence on air travel which could cause domestic and international transfer challenges.

* The World Cup would be held in a southern hemisphere winter. Two of the candidate venue cities (Canberra and Geelong) have average temperature below 10 Celsius during the evening in June and July.

* Japan has a track record of hosting major international sport events as it jointly staged the 2002 World Cup finals with Korea after hosting the 1964 Summer Olympics and two Winter Olympics, in 1972 and 1998.

* Japan plans a $6 billion Universal Fan Fest to allow 360 million people worldwide to view matches live in 3-D telecasts at nearly 400 select stadiums in FIFA’s 208 member countries. Games would be shown on giant screens at the stadiums and could even be projected like real matches onto the pitches themselves.

* Its bid plan does not mention government guarantees for such measures as tax exemptions for football’s governing body FIFA, although Prime Minister Naoto Kan promised FIFA inspectors in Tokyo in July: “If Japan is chosen as the host, the government, for its part, will make all necessary preparations.”

* Qatar has based its 2022 World Cup bid on its Arab flavor and its compactness. The bid has proposed to build most stadiums within 30 minutes of each other by public transportation and spectators will be able to watch more than one match a day.

* To counter the desert heat, which can reach 50 degrees Celsius in the summer, Qatar will use radical cooling systems that would keep temperatures around the 27 degree mark inside stadiums.

* The desert heat remains a problem. The radical cooling mechanism which Qatar has promised has not been tested in actual conditions with thousands of people inside venues.

* A compact World Cup is being projected as an advantage, but it is also a weakness. People love to visit several cities to soak in the atmosphere. A football World Cup is more than a tournament.

Slogan: The game is in us

* The memory of a successful tournament in 1994 - there had been concerns beforehand over the U.S.’ credentials to host a football tournament, but these proved to be unfounded as the average attendance soared to a record 69,000.

* Terrorism - since the Sept. 11 terrorist attacks, national security has been an overriding consideration in the United States and there are fears that more trouble could lie ahead.

* Football has made strides in the United States, but the sport still lags behind the big four of American football, baseball, basketball and hockey.