Michael Douglas fights back from cancer

Michael Douglas fights back from cancer 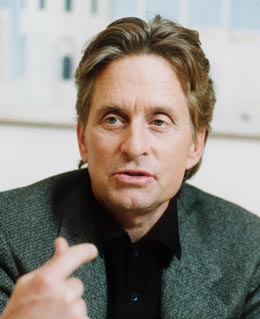 Michael Douglas, who was diagnosed with throat cancer in August, says the disease gave him perspective on mortality. [JoongAng Ilbo]

LOS ANGELES - Michael Douglas is on an “upward curve” after cancer treatment, his wife said in remarks published Tuesday, while the veteran star said the experience gave him “a little perspective on mortality.”

Douglas, who was diagnosed with throat cancer in August and has been out of the public eye while undergoing chemotherapy, said he is already preparing for his next movie, in which he is due to play flamboyant entertainer Liberace.

“The level of chemo, the amount they’re giving you, combined with radiation, was the max they could do in that period of time,” he told The Hollywood Reporter, calling the treatment a “hellhole.”

“It’s amazing that they almost have to try and kill you to bring you back,” he added, with the interviewer describing Douglas as looking “surprisingly well, with his trademark thick hair all there on his head.”

Douglas, 66, only revealed his diagnosis when he returned to the United States from a family holiday.

In September, he said he was in stage four cancer but with an 80 percent chance of beating it.

British actress Catherine Zeta-Jones, who married Douglas in 2000, voiced anger at the time that his chances of beating the cancer had been reduced because it was diagnosed relatively late.

In this latest interview, carried out in the couple’s New York apartment, she said she didn’t take any notice of tabloid newspaper reports suggesting her husband could be near death.

“I don’t read any of that stuff, regardless of what it says,” she said. “Where it does affect me, it’s the fact that Michael is sequestered in the apartment.

“But he really is on the upward curve now,” added the 41-year-old.

Douglas will have a positron emission tomography (PET) scan in January, to learn whether his tumor has been eliminated, the couple told The Hollywood Reporter.

Asked how the disease had affected him, Douglas said: “I haven’t really digested it yet, truth be told. As I looked through the stats, I didn’t think of this as life and death; I just saw it as an illness to get over. So I didn’t dig into the bottom of my soul to see what I could see. It certainly has put a little perspective on mortality, obviously.”

Douglas’s last film, the sequel to the 1987 box office hit “Wall Street,” came out in September. Douglas filmed the sequel before the cancer diagnosis.