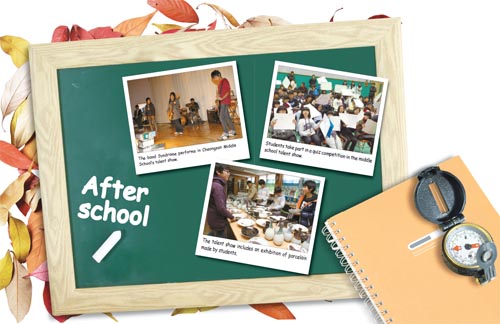 CHEONGSAN ISLAND, South Jeolla - Once a dreadfully boring island for its 37 middle school students, Cheongsan Island has been injected with some life thanks to a few extracurricular activities.

Just a few years ago, the students of Cheongsan Middle School on the island in South Jeolla only had one dream: get out as soon as possible. The only one on the island, their middle school is one of the smallest in the country. After graduating, most go to the mainland for high school. Those that don’t make it to the mainland go to Wan Island - a bigger, less boring island about 50 minutes by boat from Cheongsan.

Mainlanders flock to Cheongsan Island for its picturesque sunsets and quaint island charm. It was the set of the movie “Seopyeonje” and is part of the Italy-based Cittaslow (slow city) campaign.

But for Kim Eun-young, 14, and her 36 schoolmates, the island had been a place of isolation and dullness. After all, the island had almost nothing to offer young teenagers: no piano schools and no shopping centers. She - like just about everyone else here under the age of 20 - wanted out.

But largely thanks to the efforts of Jeong Yeon-guk, Cheongsan Middle School’s principal, things around here are slowly changing. 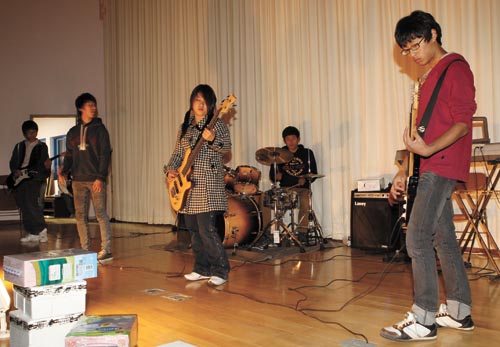 
Jeong introduced extracurricular programs and convinced talented teachers to lead them. “When I first arrived at the school, everything was old. We didn’t even have a proper library or science lab,” he said. “When the environment is poor, teachers avoid coming here. The students ultimately bear the biggest burden of that.”

His first step was to secure funding from the school board to repair aging infrastructure. Jeong sent requests to the South Jeolla Office of Education, asking for new residences for teachers. He also wanted upgraded educational facilities.

His efforts paid off. The South Jeolla Office of Education and the Samsung Equal Opportunity Scholarship Foundation both stepped up to provide funding.

For Kim Eun-young, the island is not the boring place it once was.

Since April, Kim has been participating in an after-school photography club. For her, once boring beaches and hills are now the subjects of photographs.

Kim even says she is not in as much of a rush to leave Cheongsan. The island’s charm has inspired her to become a travel writer, she said. 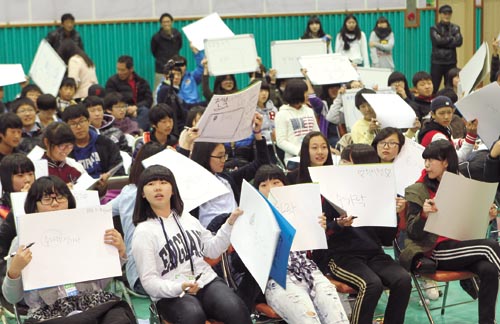 Students take part in a quiz competition in the middle school talent show.


She uses a Nikon FM2, a film camera rarely in use anymore. The students’ cameras and film were donated by Hong Jin-sun, an Incheon-based professional photographer. Hong is a member of Visual Worship Institute, an international organization of photographers.

Hong said he fell in love with Cheongsan Island when he visited with Visual Worship Institute members to capture the island’s famously slow pace of life.

“Cheogsan is an island where the young population leaves and elders remain,” Hong said.

With the help of VWI members, Hong collected 18 million won ($15,500) to start the island’s first photography club for teenagers.

Hong spends half of each month on the island and half in Incheon. He said he plans to move to the island for good in two years when his eldest son goes to college.

“I want to change the kids and the island with my photography,” he added. 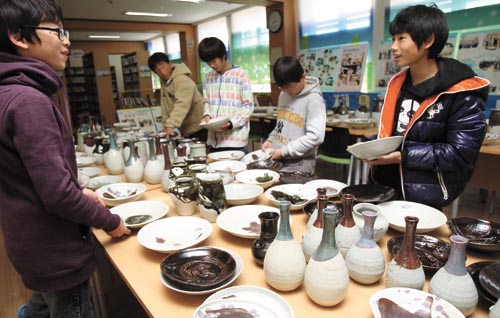 The talent show includes an exhibition of porcelain made by students.

For students who had nothing to do, there was always Starcraft. Lee Kyung-hee admitted that his son Jae-ho was hooked on computer games, mostly because there was nothing better to do.

Kyung-hee, a native of the island, said he hated that his son played games all day, but he did not blame him. After all, what’s a 15-year-old boy to do on this island? In his younger days, he recalled fleeing the island - which he referred to as “limbo between sea and sky” - after he finished middle school.

To fight their boredom, 17 students formed a music club, and six started a band. The music club is so popular that half the school’s students are involved.

At a recent talent show, the band Syndrome confidently stepped on stage at Cheongsan Middle School. Choi Hyun-chul, 13, belted out vocals of Green Day’s “Basket Case,” Jae-ho pounded away on the drums, while Im Da-bin, Jeong Do-nyeon and Kim Yu-jeong, all 15, played electric and bass guitars.

Since joining the club, Jae-ho says he’s become a different person. “Drumming is really exciting,” he said. “After the show, I can feel the adrenaline rush through my whole body.”

His father doesn’t even mind the noise. “What else is there to do here?” Lee asked. “It is good to see that the kids on the island now have hobbies.”

Lee Joon-taek is the man behind unlocking musical talents. He is a recent graduate of Korea National University of Education who majored in guitar in college and has played in a band for the past decade.

While preparing for the teacher certification exam, his professor suggested he go to Cheongsan Island and run the middle school’s music program. He jumped at the opportunity and moved to the island in March.

“When I first arrived at Cheongsan Middle School, the school band didn’t even have the basics,” Lee said. “But now, they are one of the best school bands in South Jeolla. Playing in a band teaches responsibility and confidence.” 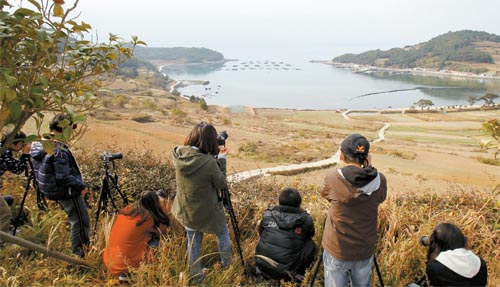 
Expression through the arts

Parents say the island’s teenagers are happier than ever. They credit the after-school activities that provide more opportunities for their kids to express themselves.

The art club is another popular program. Yang Yoo-jun, 13, said he now loves waking up in the morning. When it’s nice out, Yang takes his canvas and watercolor paints and heads inland to paint the island’s mountain.

At such a young age, Yang has already been the recipient of national painting awards. He has won prizes from an art contest at Mokpo National University for two years in a row.

“One day, Yoo-jun came to me and said, ‘I never knew roads in town were so beautiful,’” said the art club’s instructor, Kim Sang-il. “Since joining, he is calmer and now his ability to observe and think is higher than it had been.”

Kim is a long-time painter who has often made landscapes in Suncheon, South Jeolla, his subjects. He came to Cheongsan to teach art in March after being recruited by principal Jeong.

“To maximize the effect of educating, students should have fun at school,” said Jeong. “This is why we introduced the music, photography and art clubs, which students here hadn’t had access to.”