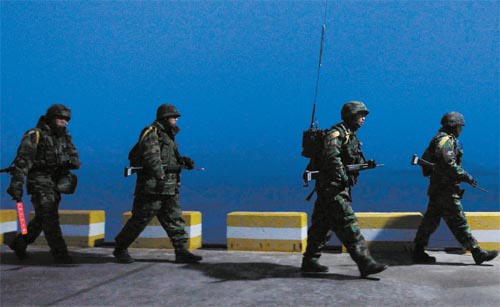 South Korean marines patrol on the Yeonpyeong Island yesterday while tensions on the island ratcheted up as South’s military planned an artillery firing exercise soon after the joint naval drill between the United States and South Korea in the Yellow Sea ended yesterday. [YONHAP]


As joint military exercises between South Korea and the U.S. came to a close at 2 p.m. yesterday, those who held their breath in fear of another possible strike from North Korea are now bracing themselves as the Joint Chiefs of Staff have scheduled another round of firing exercises this month.

According to information from the Korea Hydrographic and Oceanographic Administration, the Joint Chiefs of Staff is planning extensive firing exercises in 29 regions in the waters surrounding South Korea from Dec. 6.

The western coast where the North launched a deadly attack on Yeonpyeong Island has the most exercise points. The waters near Yeonpyeong and Baengnyeong islands will be exempt from the group exercise, but are scheduled to hold separate firing drills.

Outgoing South Korean Defense Minister Kim Tae-young had said at the National Assembly after the attack that North Korea had probably attacked using the firing exercises the South Korean military was conducting near the Northern Limit Line as an excuse to strike.

“We are looking for the right timing to hold the drills,” said Kim at the National Assembly on Tuesday.

Due to the possible lingering threat, military troops as well as residents are making preparations in case of another attack, with increased security guards in the streets of Yeonpyeong Island as well as more patrol rounds around the clock during the last day of the joint military exercise held by South Korea and the U.S.

“It was demonstrated during this round of joint military exercises that through the allied defensive network of the South Korean and U.S. military, provocations will be strongly punished, although this exercise had been something we were planning before,” said a spokesperson for the Joint Chiefs of Staff yesterday.

Another official at the Joint Chiefs of Staff said that the defensive ability of the joined forces of the South Korean and U.S. military were heightened to respond immediately in case of an emergency.

Both countries may also hold another joint training exercise to defend against provocations, but the Joint Chiefs of Staff said yesterday they were still in negotiations whether to hold the exercise this year or not.

“There are some things that have been confirmed for the agenda, but we are still negotiating specifics, so we cannot say whether it will take place within this year or at the beginning of the next,” said the spokesperson, adding that the scale of the next exercise has also not yet been confirmed.

The South Korean military has also said it is prepared to launch additional propaganda attacks against the North using its loudspeakers installed at the Demilitarized Zone between the two Koreas.

A South Korean government official who asked for anonymity said last week that it had flown roughly 40,000 propaganda fliers across the border attached to balloons at four points in South Korea.

The move was soon followed a few days later by critical comments from North Korea, saying that it was a “provocation that could not be tolerated” and calling it a “criminal act.”