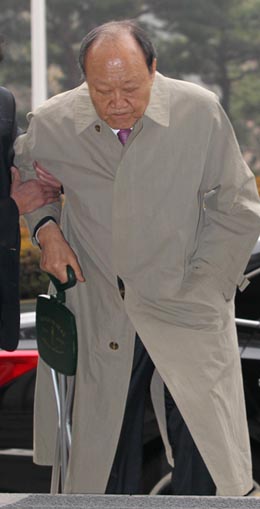 Chun Shin-il, chairman of Sejoong Namo Tour and a longtime supporter of President Lee Myung-bak, yesterday appeared before the prosecution in regard to bribery allegations. His summons comes shortly after he ended his months-long overseas stray and returned to Seoul on Tuesday.

“I will reveal everything to the prosecutors,” Chun told reporters before turning himself in to the Seoul Central District Prosecutors’ Office at 9:50 a.m.

Chun refused to answer journalists’ questions as he and his attorney headed to the prosecutors’ office.

Imcheon Industry Co. is a subcontractor of Daewoo Shipbuilding & Marine Engineering, and prosecutors believe Lim offered the money to Chun in return for helping his company get loans from banks and avoid tax investigations.

Prosecutors have already obtained testimony from Lee that he paid visits to Chun’s residence in Seongbuk-dong, northern Seoul, several times and offered a total of 2.6 billion won in cash to Chun in 2008. Prosecutors also obtained evidence that an accounting clerk of Imcheon Industry Co. withdrew a large sum of money days before Lee visited Chun’s house.

Prosecutors plan to seek a warrant to arrest Chun on bribery charges after they question him over whether he received the money and whether he actually wielded influence to pressure local banks to approve loans for the cash-troubled Imcheon.

Prosecutors on Oct. 28 raided his company, Sejoong Namo Tour, to secure evidence and had demanded Chun’s return to Korea.