Winner takes all in the 2nd leg of K-League final

Winner takes all in the 2nd leg of K-League final 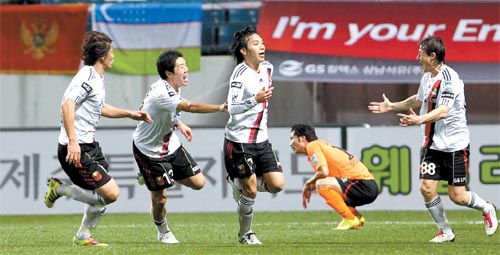 FC Seoul’s Kim Chi-woo, center, celebrates after scoring a dramatic equalizer during added time in the first-leg match of the K-League Championship at Jeju World Cup Stadium on Wednesday night. By Jung Si-jong


FC Seoul and Jeju United’s 2-2 draw on Wednesday night means that the winner of the second-leg match on Sunday afternoon will take home the K-League championship trophy.

With Jeju United dramatically blowing a 2-0 lead and the game ending in a tie, the two clubs enter the second leg match of their home-and-away series on equal footing.

Jeju United is unbeaten on home turf this season, making FC Seoul’s comeback all the more impressive. FC Seoul now has the benefit of playing in front of its boisterous home crowd. The team is an impressive 13-1 at home so far this year.

On Wednesday night, Jeju United looked to be comfortably on its way to a win after Bae Ki-jong scored the opening goal in the 26th minute and the Brazilian Santos added another in the 51st minute. FC Seoul’s Dejan Damjanovic cut the lead in half in the 58th minute and Kim Chi-woo scored a shocking equalizer to tie the game in added time. Kim is set to start his mandatory military service with the Korea Armed Forces Athletic Corps on Dec. 7.

“I’m proud of my players for coming back from two goals down to pull off a 2-2 tie,” said FC Seoul manager Nelo Vingada. “But as I mentioned, it was a game that we should have won, and as such, I’m unsatisfied with the result. We will look to make up for our shortcomings in the second-leg match.”

The exciting finish to the game has caused ticket sales for the final match to soar.

Just hours after tickets were released, sales reached 10,000. FC Seoul officials said they are hoping for a sizeable turnout of 50,000 for the final game of the season.

“I mentioned at a press conference earlier this week that I thought we would win the first game 2-0,” said Jeju United manager Park Kyung-hoon. “It’s too bad the game ended in a tie, but [I predict] we will play an entertaining game and win in front of a large crowd to take home the championship.”

With the tie, Jeju United was able to end the season without a single loss at home with a 13 wins and nine draws on the year. But after enjoying home field advantage on Wednesday night, Jeju United will be at a disadvantage playing in front of a supportive crowd in Seoul.

Another concern for Jeju is its midfielder Koo Ja-cheol, who had injured his calf in the semifinal. Listed as questionable, Koo played on Wednesday night and is expected to play on Sunday because the swelling in his injured calf has subsided, despite feeling lingering pain. Koo assisted on Santos’ goal.

“It’s disappointing that we could’ve won, but the game ended in a tie,” Koo said. “But there’s no need to get down on ourselves. We still have another game to play.”

If the second leg match is tied after regulation play, the two sides will play extra time. If a winner is not determined at the end of extra time, the winning team will be determined with penalty kicks.

The match will be held at Seoul World Cup Stadium on Sunday at 2 p.m.