A sea of color for Chagall retrospective

A sea of color for Chagall retrospective 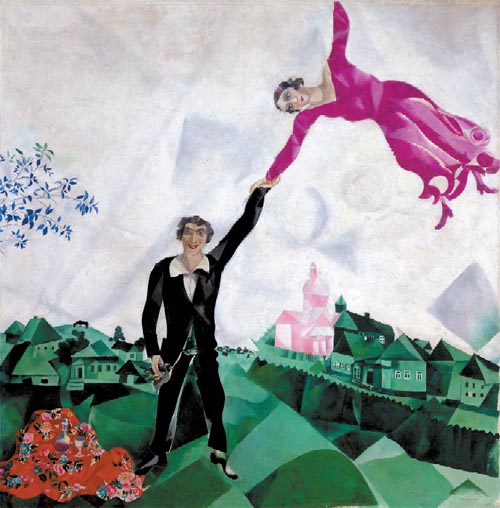 “Promenade” (1917-1918), painted during Marc Chagall’s Russian Period, will be shown as part of the “Chagall: Magician of Color” exhibition at the Seoul Museum of Art. ⓒMarc Chagall/ADAGP, Paris - SACK, Seoul


“The Snow Falling on Chagall’s Village” by Kim Chun-su (1922-2004) is a popular poem in Korea that became more popular because of a now-defunct cafe named after it. The cafe, near Gangnam Station in southern Seoul, was one of the most popular places for dates among college students in the late 1990s. Kim was said to have gained inspiration for the poem from the 1920 oil painting “Over Vitebsk” by Marc Chagall (1887-1985).

Now, those who love the poem or have fond memories of the cafe can see the painting in person at a large-scale retrospective of the Russian-French artist, entitled “Chagall: Magician of Color,” which starts today at the Seoul Museum of Art in central Seoul.

“Over Vitebsk” depicts a visionary scene in which a Jewish man in a black suit, carrying a cane in one hand and a sack slung over his shoulder in the other, floats in the air over a snow-covered village. The painting seems to reflect both Chagall’s affection for Vitebsk, the village where he was born, as well as his awareness of his Jewish origins and the migratory nature of his existence.

Seo Soun-jou, the director of the exhibition, told reporters at a recent press conference that it wasn’t easy to bring the work to Korea.

“It was not easy to persuade the Museum of Modern Art in New York into loaning the painting but we finally made it,” Seo said.

The exhibition, which runs until March 27, features 160 works by Chagall on loan from 30 museums and private collections, including Musee National Marc Chagall in Nice, the State Tretyakov Gallery in Moscow and the Museum of Modern Art in New York City. Seo, who also directed the 2004 Chagall retrospective at the same museum, said, “This show surpasses the 2004 exhibition both in quality and content. It includes Chagall works from the early to the late years culled from museums around the world.”

Whereas the public is more familiar with his later works, which are softer in form and tone, art critics tend to think more highly of his early works, which build on Cubism’s new idea of space and use of mystical color arrangements. 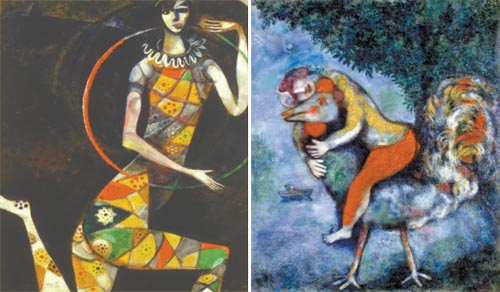 
Among the important works in the Chagall show are the oil paintings “Promenade” and “Over the Town,” which were both finished in 1918. Both paintings depict a couple - Chagall himself and his beloved wife, Bella, whom he married in 1915. Bella, he said, was the “great central image of my art.”

In “Promenade,” Bella, who is wearing a hot pink dress, floats freely while holding the hand of the smiling artist, who is still on the ground. And in “Over the Town,” even the artist has been freed from gravity and the couple fly over the town, showing the innocent joy of being in love.

“Unlike many other artists of his time, including Pablo Picasso, who was notorious for having many affairs with women, Chagall was faithful to his wife and their love lasted until Bella died in 1944,” Seo explained. “His paintings reflect that.”

“This is the first time all seven works are being shown in Asia,” he said.

In addition, the paintings are related to the turbulent history of the Jewish people in Russia in the early 20th century. The establishment of the Jewish Theater in 1919 reflected the changes in rights of Jews after the 1917 Russian Revolution. Prior to that, Jews faced systematic discrimination. After the revolution, they were finally given rights equivalent to the rest of the Russian population. It comes as no surprise, then, that Chagall supported the revolution.

Chagall must have made the paintings with pleasure. But he finally left Russia in 1922 because of growing conflict with artists in the government who argued that art should include revolutionary messages, which they found lacking in Chagall’s work.

Later, in 1948, the Jewish Theater was shut down by Stalin’s regime, which also discriminated against minorities in the Soviet Union. Fortunately, an artist secretly moved Chagall’s paintings from the theater and kept them well. Chagall was surprised and happy to see the paintings, which he thought would have been destroyed, when he visited Russia in the 1970s.

The exhibition will also show Chagall’s paintings of biblical stories and circuses and acrobats, which were repeated themes in his works. Also on display are illustrated prints based on the classics, such as “Four Tales from the Arabian Nights,” “Daphnis and Chloe” and “Les Fables de La Fontaine,” which show Chagall’s unique sense of color.