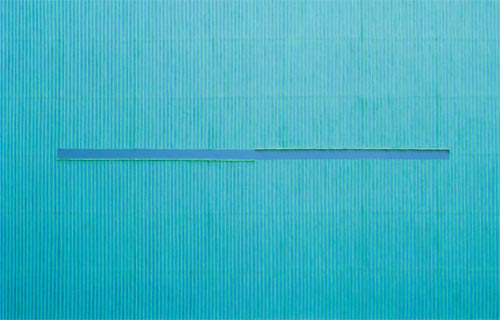 
Large-size monochrome or two-color abstract paintings now fill Kukje Gallery’s Space 1, the well-known yellow building in Samcheong-dong in central Seoul, and the building in the back alley known as Space 2.

The exhibition is an homage to Park Seo-bo, 79, who is regarded as one of the leaders of 20th century modern art in Korea. It is the first time that the gallery has held a solo exhibition by the same artist in both spaces.

“Frankly speaking, I might have been happier if I had died in the 20th century,” Park told the press last week, his voice still vigorous and clear. “But I’m still alive so I’ve been thinking about what 21st century art is.”

Park continued, “The way for art to survive in the 21st century is for it to not rush to adopt digital technology, but for it to function as a mechanism for healing. Artists should not push their ideas onto the viewer. They should empty their works so that viewers can enter and rest in them.”

His views are reflected in the 50 works now on display at Kukje Gallery. The works are calm and meditative.

Space 1 displays Park’s signature “Ecriture” (“Writing”) series from his early and middle years. To create the works, he covered the canvases with light-colored paint and manipulated the still-wet surfaces with repetitive carving gestures.

Space 2 is filled with the artist’s new “Ecriture” series, which he started in 1989. For these works, Park piled layers of dakji, traditional Korean paper, on the canvas and saturated the layers with gesso, or acrylic paint. Then he shaped the wet surface with his fingers or implements.

“This process added dimensionality and physical presence to the canvas, which would have been impossible to achieve just with oil or acrylic paint,” Kukje said in a press release. “Most importantly, the artist sought to capture the elaborate gestures made in the act of painting in relief while simultaneously eliminating any tell-tale brush marks, thereby creating a unique and highly personal vocabulary of mark making.”