Pundits ask whether third Narnia film will sink or swim

Pundits ask whether third Narnia film will sink or swim 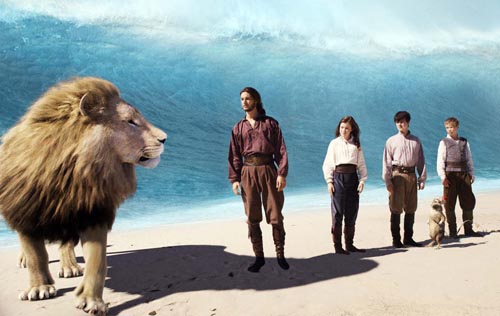 “The Voyage of the Dawn Treader” opens in Korea on Dec. 8. Provided by 20th Century Fox Korea


LONDON - The third Narnia film involves an epic sea voyage, but after its predecessor underperformed at the box office and Disney decided to ditch the franchise, it looks like sink or swim time for the series.

“The Chronicles of Narnia: The Voyage of the Dawn Treader” has its world premiere in London on Tuesday before Britain’s Queen Elizabeth and hits cinemas in some countries on Dec. 2 - Dec. 8 in Korea and Dec. 10 in the U.S.

Available in 2-D and 3-D, new co-producer 20th Century Fox will have a close eye on how the movie performs, having taken over the franchise based on C.S. Lewis’ beloved fantasy novels from Walt Disney Co.

The Voyage of the Dawn Treader follows Edmund and Lucy Pevensie, their cousin Eustace, King Caspian and a warrior mouse named Reepicheep on a mission to mysterious islands and a reunion with the great lion Aslan.

“There certainly will be an audience for this picture, I just don’t think it is going to restore the franchise to its former glory,” said Brandon Gray of the cinema tracking Web site Box Office Mojo.

When the first Narnia picture “The Lion, the Witch and the Wardrobe” came out in 2005, it earned $745 million in ticket sales and was the third biggest movie of the year, raising hopes at Disney that it could be the next “Harry Potter.”

Like the hit Potter series, there are seven children’s books of source material to work with, and a certain level of familiarity with readers around the world.

That appeared to be enough to convince Disney to part company with Narnia producer Walden Media, three years after touting it as its next blockbuster film property. Fox, owned by News Corp., stepped up in early 2009.

Prince Caspian’s theatrical performance would normally be considered impressive, but with production costs estimated at more than $200 million, a hefty marketing budget and unflattering comparisons to the first movie, it was deemed a failure.

With no decision yet made on a fourth movie, much will be riding on The Voyage of the Dawn Treader.

Gray said Fox and Walden should not expect too much.

“I would consider it a relative success if the picture gets close to the Prince Caspian numbers,” he said.

The next book in the series after Voyage is “The Silver Chair.”