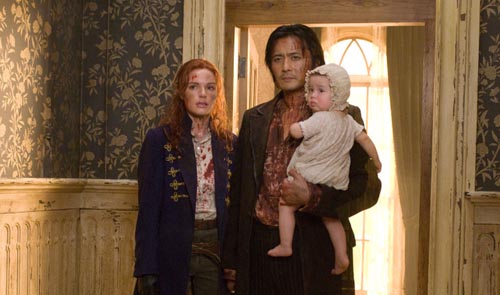 “The Warrior’s Way” features Korean actor Jang Dong-gun, right, as a warrior who goes West to exorcise his demons, and Hollywood actress Kate Bosworth, who looks to the Asian hero for help in exorcising hers. Provided by SK Telecom


They say there is nothing new in the world. Fashion comes and goes and history repeats itself. The same goes for films. Directors find inspiration in the classics and produce films based on the work of their predecessors. That’s what Korean director Sngmoo Lee tried to do with his first film, “The Warrior’s Way.”

In an interview with the local press last month, the 47-year-old director, who also wrote the script, said his first feature is an ode to his favorite films, which include “Shane” (1953) and “Seven Samurai” (1954).

In The Warrior’s Way, Lee imagines a world where East meets West, and he manages to achieve that through the cast, which includes Kate Bosworth and Danny Huston, as well as Korean actor Jang Dong-gun.

The film was released on Wednesday in Korea and is to open in the United States today.

The Warrior’s Way tells the story of an omnipotent Asian swordsman Yang (Jang Dong-gun), who slays his enemy, but can’t kill the last living member of his enemy’s clan - an adorable baby girl with rosy cheeks - so he takes her with him. He has already decided to go West, and he and the baby settle down in a dusty, run-down town in the middle of a desert. Yang, a man of few words and empty eyes, soon learns to appreciate the joys of ordinary life. He gets into gardening and builds relationships with his neighbors. Romance also blossoms between Yang and Lynne (Bosworth), a tomboy who is waiting for her chance to kill her own enemy, the Colonel (Huston).

Among the townspeople, there are some interesting characters, including a former-cowboy turned drunkard (Geoffrey Rush), a whimsical dwarf and a trio of mischievous teenagers.

It is a novel idea for an Asian swordsman to go to the West and become a hero there. But that plot twist is not strong enough to save the film from all of the usual cliches.

There’s a warrior with a past, whose new-found happiness doesn’t last that long. There’s a former cowboy who is always drunk but later transforms himself into a wise sage. There is the obligatory romance between the hero and the town beauty. In one such scene, Yang, holding a baby in one hand and a sword in the other, his face stained with blood from his previous fight, stands alongside his true love.

With a reported budget of $52 million, which is equivalent to that of such Hollywood blockbusters as “300” (2006), The Warrior’s Way could have gone beyond cliches to really show us something different. Unfortunately, what emerges is a string of tired plot tricks that don’t add much to the genre.

These days, people watch movies for two reasons: they either want a good story or they want to be overwhelmed by strong visuals and special effects.

And since the film fails to deliver the former, I was hoping to be dazzled by the latter. Sadly, visual imagery is not the film’s strong suit either. The Warrior’s Way looks less like a film and more like a well-designed online role-playing game.

Another problem is that Lee, the director, tries to mix elements from Asian and Western films, but the end result is a little like going to a buffet and eating too many different kinds of food. After all that, your palate just can’t remember what you’ve eaten.