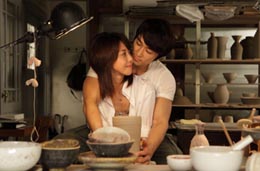 In the Hollywood version, the late Patrick Swayze played a man who is killed during a mugging and remains on earth to warn his girlfriend (Demi Moore) of impending danger. In the Asian version, the story focuses on Nanami (Matsushima), a successful CEO who falls in love with Jun-ho (Song), a student from Korea who goes to Japan to study pottery. The two fall in love, but things go horribly wrong when Nanami dies suddenly after an unexpected accident. Unable to leave Jun-ho, Nanami follows Jun-ho around while trying to discover the secrets behind her death.

The film is a co-production by companies from Korea, the United States and Japan. It is directed by longtime NTV director Ohtani Taro, who directed the Japanese drama “Gokusen” from 2002 and produced by Takashige Ichise, who has facilitated several major Hollywood remakes of Asian films including “The Grudge” and “Shutter.” 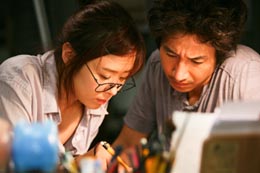 Choi Kang-hee and Lee Sun-kyun, the stars of the 2008 SBS drama “My Sweet Seoul,” are together again, this time as an awkwardly cute couple.

Da-ram (Choi) is fired from her job as a translator for an adult magazine because she insisted on writing her own sex column, even though she has slept with none of her previous boyfriends. Jeong-bae (Lee) is an adult cartoonist who can’t get work because of his lousy story lines. The two meet when a comic book publisher announces an adult comic book competition with a 100 million won prize. Jeong-bae needs a writer and Da-ram wants to write something of her own. Both need money. So begins the rocky adventure between the serious and slightly boring Jeong-bae and the overly-creative Da-ram. Can the two appreciate each other’s differences and finish the comic?

Images of the deep south - cotton fields, sweltering summer heat and hard-to-understand dialects - turn out to be the perfect setting for “The Last Exorcism,” a mockumentary horror film about a reverend’s final exorcism.

The isolation of Louisiana combined with the documentary style of this film directed by Daniel Stamm might make for an engaging and unique horror film - this one about Rev. Cotton Marcus, who is losing his faith in God and decides to perform one final exorcism in front of a camera crew to expose the practice as a fraud.

But when the reverend meets Nell, the exorcism candidate, and her father, Louis, he gets more than he bargained for when it turns out Nell might not be faking getting possessed by a demon.

All the while, the documentary camera crew is trying to get everything on tape and even help the reverend expose exorcism as phony.

The Last Exorcism’s complex mix of characters could drag the movie down, but its concept is likely smart enough for horror fans to enjoy.

Jennifer Aniston plays an unloved, unmarried woman in her 40s in “The Switch,” a romantic comedy that also stars Jason Bateman, Jeff Goldblum and Patrick Wilson. But Aniston, in this case, isn’t playing herself, though it sort of seems like it.

Instead, Aniston, Hollywood’s ex-girlfriend many times over, portrays Kassie, who really wants a baby - so badly that she finds a sperm donor and hosts an insemination party for her friends.

In comes Kassie’s best friend Wally, played by Bateman, who proceeds to get utterly lashed at the party, accidentally spilling the seed meant to be injected into his friend.

In a drunken panic, Wally replaces the semen with his own - then somehow forgets about it for many years.

When Kassie returns to New York several years later with her son in tow, Wally once again remembers his misdeed from years past, though Kassie has no idea.

Based on a short story written by Jeffrey Eugenides (“The Virgin Suicides”), The Switch offers an unconventional plot line that eventually ends in typical sentimental fashion. Still, the film is an entertaining, albeit rather improbable, story for viewers.