Put up your feet: ‘smart work’ adds hours to your day

Put up your feet: ‘smart work’ adds hours to your day 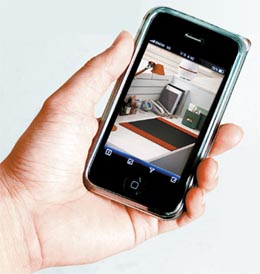 After a late night at the office, Kim Chang-il, a manager for KT’s Service Planning division, decided he deserved a break. So he slept in until 8 a.m., before taking a 20-minute shower, putting on some jeans, throwing on a T-shirt and clocking in for the day.

Kim is part of a growing number of workers who telecommute from home, essentially adding hours to his workday by forgoing Seoul’s snarling traffic.

Kim works half the week from his apartment in Cheonho-dong and the other half from a so-called “smart work center” in Bundang, Gyeonggi. The center acts as a satellite office so employees do not have to go to the main office in Gwanghwamun, central Seoul, which can take over an hour.

There are three types of smart work: telecommuting from home, working while on the move in a “mobile office,” and working at smart work centers.

“It feels like being a college student again,” Kim said. “You schedule your time on your own. Missing class may not matter, but I do have responsibilities.” 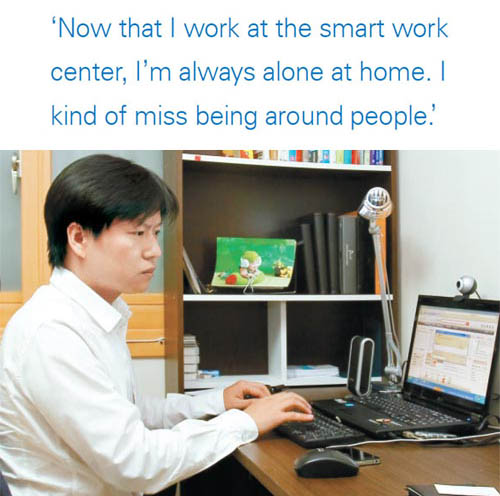 Kim Chang-il is a manager for KT’s Service Planning division. He works half of the week from home.


There are downsides to not working at his company’s headquarters. “Now that I work at the smart work center, I’m always alone at home. I kind of miss being around people,” said Kim.

By working at home or in the satellite office, Kim’s working hours are more flexible and his productivity is higher, he says.

Korea aims to have 30 percent of all public employees working from home or in smart work centers by 2015, according to the Korea Communications Commission, Ministry of Public Administration and Security, and the Presidential Council on Information Society in July.

Korea’s established and advanced information technology infrastructure has been the foundation for the smart work trend.

Workers can connect to their office workstation from home. If on the move, they take their Internet-enabled netbook with them. The creation of smart work centers saves workers from time-consuming commutes. And connecting all of these is the explosion in popularity of smartphones and tablet computers. 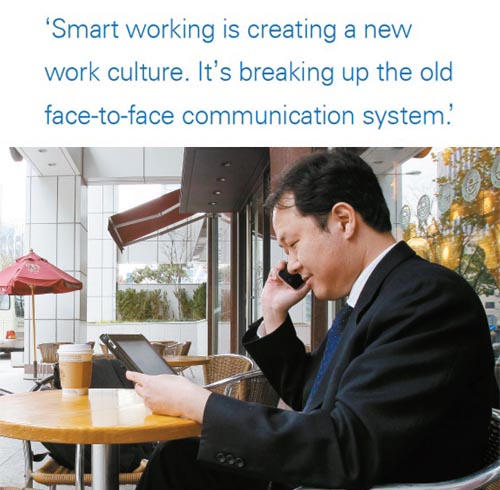 Im Ye-hwan is chief of KT’s division in charge of IT consulting. He spends a lot of time working on the road.


Working on the go

Another KT manager, Im Ye-hwan, sat at a cafe, took out his smartphone and tablet computer.

He logged onto his company Intranet and checked his e-mail. He had received many messages since last checking his e-mail before lunch. Im then turned on his tablet computer and remotely connected to his laptop at his Gwanghwamun office. He can access all the data on his laptop whereever he his in the country.

Between his tablet computer and smartphone, Im does not have to carry around his laptop, even when he consults with clients or does a presentation. He can write e-mail and take notes with his electronic gadgets.

“Two days ago, I went to consult with officials at a university in Chungju on information technology. I simply turned on my tablet computer to remotely control a beam projector through my laptop in the Seoul office,” said the 40-year-old Im.

Im demonstrated the connection. As he connected his tablet computer to his laptop in his office, the screen on the laptop mirrors the one on his tablet. Yim opened a document and logged on to the company Intranet to look over consulting proposals.

“Since I have to meet and consult with clients, I’m out of my office most of the time. In fact, I have been ‘mobile working’ for a decade,” said Im.

“But back then, I had to carry a heavy laptop and an external USB-connected hard drive. Not only me, but people engaged in sales have been working like this for quite a while,” he added.

For Im, “smart working” is changing how business is being conducted. “In the past, smart working was only a tool. But now it is creating a new organizational culture. It’s breaking up the old face-to-face communication system,” said Im.

His tablet computer and smartphone allow Im to make his office anywhere.

He goes to his company’s Gwangwhamun headquarters only twice a week. The rest of the time he works according to his own schedule. Sometimes Im is working on the road. Other times he is at the KT smart work center in Bundang, in coffee shops or even in PC rooms.

Im, however, believes the mobile office system is not suitable for all occupations. Although the technology has been there for years to implement smart work schemes, Im sees trust between supervisors and employees as the main issue when it comes to adopting such a system.

“A manager cannot constantly keep an eye on what his employees are doing and where they are,” said the KT information technology consultant.

Ultimately, the success or failure of a smart work scheme is based on outcome: Is the work getting done, and more importantly, is it getting done faster?

“It is not all only about outcome, but the culture of assessing employees based on mutual trust should be widespread by now. It is changing, but look around. Who gets ahead in Korean society - employees who do a better job or those who suck up to their boss?” asked Im. “It is not that a results-based system is always right, but organizational culture will nevertheless have to change in order to fully introduce smart working.”

Both the private and public sectors are keen to get in on the smart work bandwagon as experts say it ultimately boosts productivity and lowers carbon emissions. 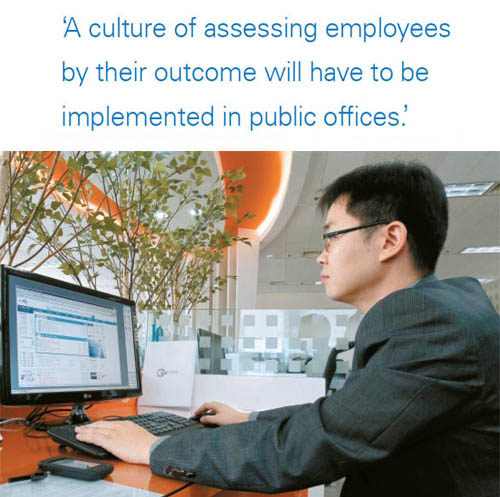 Jeong Cheol works for the Ministry of Public Administration and Security. He has started working at a smart work center. By Shin In-seop


Working at a satellite office

Jeong Cheol is in charge of the “ubiquitous computing planning team” for the Ministry of Public Administration and Security. He lives in Nowon District, northern Seoul.

To get to work on time, Jeong had usually left his house at 7:30 a.m. every day to arrive at his Gwanghwamun office after an hour-long bus and subway commute.

But on Nov. 23, Jeong stepped out of his front door at 8:30 a.m. and arrived at a smart work center in Dobong District at 8:50 a.m. It was his third day reporting to the new center. He said he is able to get a lot more work done, because he is not stuck in traffic or wasting energy competing to get a seat on the subway.

The Ministry of Public Administration and Security opened the smart work center in November. There, government officers can work closer to their homes.

The center has space for 24 people, and another center has opened in Bundang, Gyeonggi.

It is still going through a trial period and is used by government officials from eight agencies and ministries, including the Fair Trade Commission, the Korea Communications Commission, and the Ministry of Education, Science and Technology.

As part of the trial, each agency or ministry sends up to three employees to the center for experience.

Inside the center, there are partitioned seats, and each work station has a desktop computer. Jeong takes his spot at station No. 3, enters a password into the computer and connects to the Internet. After he enters the PIN number and logs on to the system, he sees the same screen he would see at his office.

“Since they have to access the government Intranet, we take security very seriously. External USB drives can only be read, and copying is not allowed. There is a firewall separating the governmental Intranet from the common Internet,” said the Ministry of Public Administration and Security’s Kim Suk-tae, who is in charge of the smart work center.

Last Friday, Jeong reported to the center after he dropped off his child at kindergarten.

Jeong said that since he has worked at the smart center, he has had more time to spend with his family. A result, he says, is that he can concentrate more on his work.

“It is true that not reporting to the office and seeing my bosses face to face makes me nervous, especially as I’m working a public office,” Jeong said. “So a culture of assessing employees by outcome will have to be implemented in public offices.”