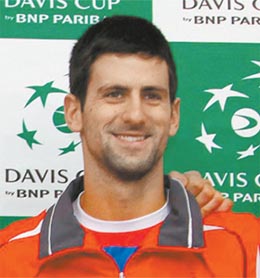 BELGRADE, Serbia - Novak Djokovic will carry the hopes of Serbia in the Balkan nation’s first ever Davis Cup final against nine-time former winners France at the 16,000 capacity Belgrade Arena this weekend.

The world No. 3 is seen here as a solid bet to win both his singles rubbers, leaving his teammates free to add the clinching point in one of the three remaining ties. But with both captains having different ideas about their choice of a second singles player and with the doubles scenario too close to call, it could go all the way on Sunday.

Djokovic has been the driving force behind Serbia’s rise as a Davis Cup power and this year he has a perfect five wins out of five, as the Serbs stormed past the United States, Croatia and the Czech Republic. In so doing, he has forged rock-solid ties with the rest of the Serb team - Janko Tipsarevic, Viktor Troicki and doubles specialist Nenad Zimonjic.

The 2008 Australian Open champion has been in fine form as of late after a stuttering start to the year. And his semifinal loss to Roger Federer at the ATP Tour finals in London last week means that he will reach Belgrade relatively refreshed.

The hugely-patriotic Djokovic has left no doubt that his top priority this year is leading his country to what would be a historic Davis Cup triumph.

The chances of France bagging a 10th Davis Cup title to draw level with Britain as third most-successful nation in the 110-year history of the competition received a body blow at the start of November when top player Jo-Wilfried Tsonga put an end to his season with a knee injury.

But stepping into the breach has been flamboyant Gael Monfils, who won the ATP tournament in Montpellier, France, and then reached the final of the Paris Masters to rise to world No. 12, one place ahead of Tsonga. Monfils, known for his showmanship but also for his inconsistency, will lead the way for the French with Gilles Simon and Michael Llodra in competition for the second singles spot and Llodra linking up with Arnaud Clement in the doubles.

The draw for the final will take place on Thursday with the opening two singles on Friday, followed by the doubles on Saturday and the reverse singles on Sunday.