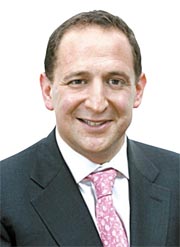 For English-language publishers planning to try their hand at the electronic-book business, there’s no other market like Korea. After all, the country is known for its insatiable appetite to master the English language and Koreans’ need to get their hands on the latest technology services and gadgets. More than 90 percent of households have broadband Internet access, and more than 98 percent of citizens have mobile phones. This is exactly why the Korean market shines more brightly than other Asian markets for e-book publishers. Sterling Publishing Company, a subsidiary of Barnes & Noble, the largest book retailer in the United States, has became one of the first foreign publishing companies to offer e-book titles in Korea, says Sterling Publishing Company CEO Marcus Leaver.

According to the Korean Publishers Association, a total of 420,191 books were published in Korea last year, down 2.1 percent from the previous year. The story’s not as gloomy for e-books, as the number of newly published e-books was 230,271, up 60 percent on-year. According to the report, Koreans read 10.9 books on average last year and spent 17,000 won ($14.81) a month on books.


Q. Sterling is one of the first foreign publishing companies to offer its titles as e-books in Korea. How important is the Korean market to Sterling?

A. Korea is our largest Asian market. And we’ve had great success in Korea. You would have heard of books called “Letters to Sam, “Keep Going,” “Puff the Magic Dragon.” We’re very good at children’s books, and we have a series called “I’m Going to Read,” “Begin Smart,” and “Classic Starts.”

Going forward, we’re aggressively expanding into the digital arena. And the reason that we’ve chosen Korea is that Korea is a very good test bed for us outside of the U.S. to see what we have to do as an English-language publisher that publishes in foreign markets.

We’re one of the first English language publishers to experiment in a number of different formats here - for instance, with application companies, with interactive TV companies, e-book conversion companies.

With 98 percent penetration rate of broadband Internet access, it’s a country that clearly has a digital future. The mobile phone penetration has been very advanced here for a long time, and the consumption of content on mobile devices has been very prevalent as well. Korean hardware manufacturers are leaders in the world. So I think all of that converges to make this Sterling’s best Asian market, to make us needing to be here, needing to explore the opportunities here.

If you look at how we’re selling our books in Korea - we’re selling English-language versions of books, we’re selling digitally, we’re also selling the rights to the Korean-language books. So I think I have all the bases covered. I’m very happy for Koreans to be able to read Sterling titles in English or Korean as well as in book format and on digital devices.

I think parents of young children would be our biggest consumer base. I would like them reading our books to their children.

How do you think new devices like tablet PCs will change the e-book industry?

Clearly we’re at a stage where there are lots and lots of devices coming to the market. The way I see it is that not all these devices will survive. I mean, history says that when new devices all come out at the same time there are a few winners - the most obvious case in history being VHS versus Betamax. So at some point there will be a few winners left. That’s why the most important words in my organization regarding content is that we’re platform-agnostic. If I back one horse in a race and another horse wins I’m in trouble. That’s why I want to be platform-agnostic. We are a content producer so I want to put my content in as many platforms as possible and let the technology companies work out who’s going to win.

If you are asking whether I think people will be reading on tablet PCs compared to reading on e-ink devices, the answer is that some people like the fact that iPad is backlit, while other people don’t like that. Some people just want a reader separate from other media devices. I think what you’re seeing in the converged world is that there is a divergence of how people use their devices. Everyone has different needs.