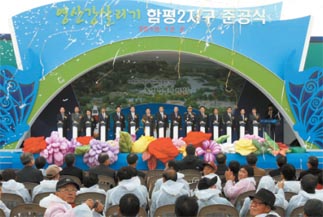 The Ministry of Land, Transport and Maritime Affairs announced yesterday that work on another part of the four-rivers restoration project in Hampyeong County, South Jeolla, has been completed. The section is part of a tributary of the Yeongsan River.

The ministry marked the event with a ceremony yesterday at Hampyeong Stream with the participation of 600 area residents.

The Hampyeong Stream segment of the Yeongsan River restoration project is being carried out in three sections: north, central and south.

The ceremony held yesterday was for completion of work on the central section.

“Construction on the north section will be finished in July 2011 and the south section in September 2012,” the Yeongsan River restoration project team said.

Construction on the central section, with a budget of approximately 34.6 billion won ($30 million) from the government, began in July 2006.

The goal of the four-rivers restoration project is to turn the rivers into eco-friendly habitat for wildlife and safe water storage for area residents.

In conjunction with yesterday’s ceremony, the ministry released two photos showing aerial views of the previous and current state of the river’s completed section, which snakes through rice paddies along its 8.3 kilometer (5.15 miles) route.

When work on the river is complete, the river is expected to handle more water in a sudden and heavy downpour. The refurbished river will also have a 290,000-square-meter (290 hectare) reservoir, also to protect the surrounding area during heavy rainfall. According to the ministry, the reservoir will lower the water level by 21 centimeters during flooding.

On sunny days, however, the reservoir will become an eco-friendly artificial pond, attracting many travelers, the ministry says.

The ministry said it will turn the reservoir into a tourist destination during the butterfly festival in spring and chrysanthemum festival in the fall.

“I am really proud of the new clean stream,” said Jeong Byeong-gyu, head of a local senior citizens group in Hampyeong County. “I think the river will be a hot spot for the locals.”

Completion of the Hampyeong Stream segment is the second four-rivers project to be completed since work on part of the Nakdong River was completed in Busan in September.