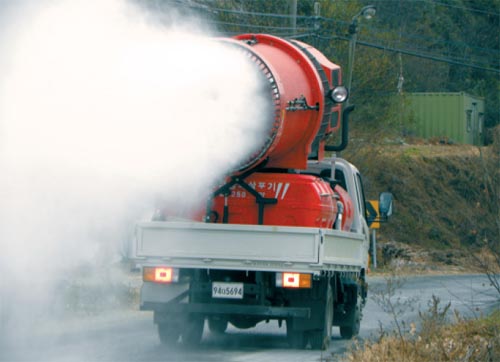 
With three more cattle farms having been found yesterday to have cases of foot-and-mouth disease (FMD), the government plans to allocate for now 14.6 billion won ($12.7 million) to compensate farmers for the slaughtering of thousands of livestock in an effort to eradicate the virus.

As of yesterday, more than 53,000 animals are scheduled to be slaughtered, surpassing the scale of an outbreak that swept through the Gimpo and Ganghwa regions in April and May, which led to the slaughter of 47,000 livestock.

The Ministry for Food, Agriculture, Forestry and Fisheries yesterday confirmed more cases of FMD within 10 kilometers (6 miles) of where the first outbreak of the virus was reported in Andong, North Gyeongsang.

“The suspected FMD cases at cattle farms in Raso-ri, Gaya-ri and Icheon in Waryong-myeon were declared to have FMD,” the ministry said.

If the farms are found to have FMD, it would indicate that the government’s 10-kilometer radius quarantine zone has collapsed.

Test results for the six cattle farms are scheduled to be announced today.

Health officials and local authorities are on high alert to quell further spread as the FMD virus continues to infect more areas.

The ministry drew up 17.5 billion won in emergency funds on Wednesday to battle the outbreak, including funds for disinfection measures.

Of that budget, 14.6 billion won will be given to farmers as prepayment of compensation for the slaughtered livestock, which is 50 percent of the total compensation that the government plans to give out.

“[We will] secure financial aid ... if additional outbreaks of FMD cases are reported,” said the ministry.