Most shells failed to hit their target in the North

Most shells failed to hit their target in the North 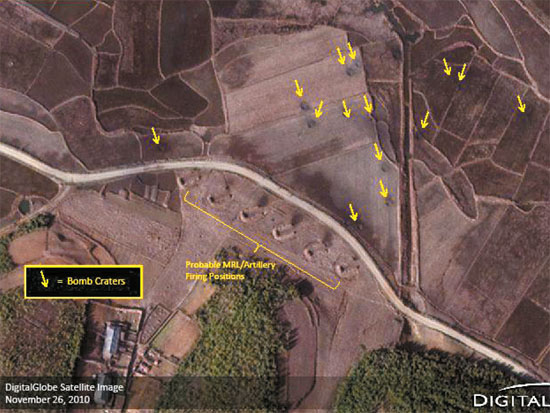 A satellite image of North Korean territory three days after it was hit by South Korean fire on Nov. 23. Yellow arrows indicate craters made by South Korean shells. The military base is in the lower half of the picture. [NEWSIS]


Since the North’s attack on Yeonpyeong Island, one question has emerged repeatedly in the aftermath: What did the South’s response fire do to North Korea?

For the first two days, the South Korean government and military said they were “collecting intelligence” and blamed cloudy weather for the delay in verifying how much damage had been done to the North Korean side.

As the furor from the public and lawmakers grew with the discovery of two civilian deaths in addition to the two marines, military officials started making firm assertions that the North’s western coast, at which South Korean troops on the island had fired retaliatory rounds, was “probably reduced to ashes.”

The Ministry of National Defense stated in an official briefing the day after the attack that there was “probably considerable damage” in the North.

But just over a week after the Yeonpyeong Island incident, satellite imagery of the area where South Korea fired upon is showing that the assertions aren’t necessarily true.

The Grand National Party’s floor leader, Kim Moo-sung, said at the National Assembly yesterday that after checking satellite images, 35 of the 80 rounds that South Korea fired had landed in the sea.

The images from the global intelligence company Stratfor also showed that many of the rounds that had managed to make it onto North Korean land had fallen into rice paddies and other farming land near a North Korean military base.

Kwon Young-se, head of the Intelligence Committee in the National Assembly, told reporters yesterday that roughly 10 rounds had hit the North Korean military base.

One of the satellite images that Kwon received from the National Intelligence Service was taken by a domestically made satellite, the Arirang-1.

“Around 10 of our rounds fell onto North Korean military territory and one of those rounds can be seen in the photo to have struck directly on one end of the barracks. We can think that many casualties may have been created from this,” said Kwon.

However, lawmakers from ruling and opposition parties alike have been questioning the basic capability of the South Korean military due to the numerous misfires.

Some expect the revelations will impact impending export projects for the South Korean-made K9 howitzer, which the South Korean military has touted since the Yeonpyeong Island attack for its excellence in aim and destruction. The K9 howitzer has been said to have a destruction range of 50 meters (164 feet) in radius.

Others have pointed out that South Korean troops on the island may have had their aim hindered because the attack was sudden, resulting in a low level of destruction.

The Ministry of National Defense refused to confirm how many rounds had struck enemy territory. The ministry added that the exact damage done to the North Korean military could not be disclosed because of “complex reasons.”

Floor leader Kim called upon the National Intelligence Service director yesterday to conduct a thorough investigation into the truth. “People have a right to know the current status of our military,” said Kim. “I hope this incident is an opportunity for our military to turn this misfortune to its advantage.”