Swing with orangutans, swim with fish

Swing with orangutans, swim with fish 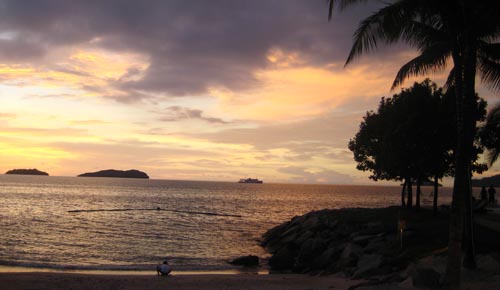 A magnificent sunset is seen from the boardwalk of Sutera Habour Resort in Kota Kinabalu, Malaysia. By Lee Sun-min


KOTA KINABALU, Malaysia - This place is famous for its bright red sunsets, and rightly so. To the west of Malaysia’s Kota Kinabalu, there is nothing but ocean as far as the eye can see. The last hour of daylight is the most spectacular, as the sun sinks into the horizon and reds and oranges streak across a dark blue sky.

The charm of Kota Kinabalu, located on the northern tip of Borneo in the state of Sabah, is that there is little to do here. But with oceanscapes like this, who wants to set up an hourly schedule anyway? The city itself is small enough to walk through, but a taxi from any hotel to the beach won’t cost more than 30 ringgits ($9.53).

The state of Sabah is about three times bigger than Seoul, but the capital city of Kota Kinabalu is only about the size of one of its districts. There are, of course, places to explore inland. Some of the most diverse jungles can be found on this island. Borneo is the third-largest island in the world and is three-quarters the size of Korea.

If the white sandy beaches and ocean waves call for you, then follow your instincts. But for those who cannot suppress a desire to keep busy, there is much to explore. 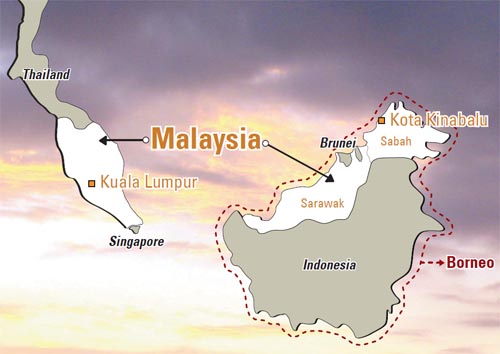 First things first: It is highly recommended to take a ferry tour of the local area. Explore the picturesque sea and the nearby Gaya Island. Once on the secluded island, visitors usually tour the Marine Ecology Research Center at the Gayana Eco Resort.

The Bunga Raya Island Resort & Spa on the other side of the island gives a sense of true paradise and seclusion. On the 1.5 kilometer-long beach, the human touch is rarely found, since few are aware of this resort. Grab snorkeling gear and jump into the water, go kayaking, or just lie down and bake in the sun.

According to the Gayana Resort official, the Korean pop group SS501 came here to shoot a music video.

Back on Borneo, the area is well-known for its population of orangutans, which are among the most intelligent primates. The only two remaining species are endangered and are found in Malaysia and Indonesia.

At Shangri-La’s Rasa Ria Resort, tourists can feed 4-year-old orangutans that were rescued after being abandoned. The resort and the Sabah Wildlife Department established this massive natural reserve to nurture orangutans that have nowhere to go. Orangutans’ natural habitat has been threatened by urbanization and logging. 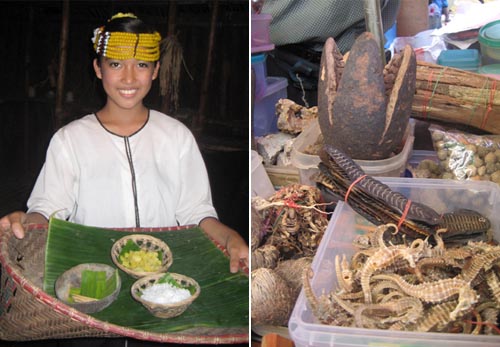 
Walking along the resort’s 3.5 kilometer-long (2.2 miles) beach, visitors get a glimpse of a jungle overgrown with all types of flora. Looking up at the jungle canopy, it is easy to spot orangutans, even though the quick primates are only the size of a 5-year-old child. Every day at 11 a.m. and 3 p.m., these orangutans swing down to a wooden podium and sit shoulder to shoulder with professional rangers to enjoy their meals. Later, some indigenous monkeys gather for the leftovers.

Even though these orangutans are not trained to entertain, they are smart enough to know when people are there to see them. After filling up, the orangutans jump over to a branch nearer to tourists busy taking photos. Using their arms as legs and legs as arms, they playfully test the sturdiness of branches. The show is more entertaining than anything available at a zoo.

Later, brave the mosquitoes by visiting Mari Mari Cultural Village, a mock village demonstrating how humans have adapted to nature, instead of the other way around.

Mari, which means “come” in English, is a place where anyone new to the indigenous culture of Sabah can learn about the lifestyles of a number of local tribes, including the Bajau, Murut and Lundayeh. According to our tour guide, some estimate that there are 40 tribes in the area.

Walking down a narrow pathway toward the tourist village, a half-naked warrior, adorned only in a (very) tiny loincloth, jumped out from behind a meter-high rock, shouting incomprehensible words and warning villagers of the “intruders” - us. After a thorough frisking (he was apparently searching us for weapons), we were prodded off to a spiritual introduction ceremony with the chief - who is the oldest woman in the village. Young warrior boys surrounded us, poking at our skin and pulling on our loose shirts. Of course, it was all a show. 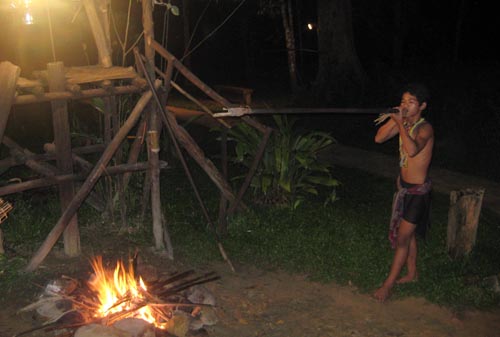 A village boy demonstrates a dart gun, which is used to hunt animals.


The tourist village portrays a life without any electricity, as well as living off the land: indigenous villagers are said to use trees and plants to build homes and items such as utensils.

Typical indigenous homes are built just 2 to 4 meters (6.6 to 13.1 feet) from the ground. No nails are used. Step into a house, and you are greeted by a skull hanging from the ceiling. According to a tour guide at the Mari Mari Cultural Village, the skull is there to prevent good spirits from leaving the house and is always hung over the kitchen floor.

Here, villagers do much more with nipa wood than building houses. Even fabrics are made from nipa wood, which are then used to make clothes. To make fabric, villagers slice a thin cut of timber and grind it with a stone for 8 hours a day. After a week, there is enough cloth to cover up those parts of the body that are usually covered up.

Toward the end of the tour, villagers offer us a variety of goods, including cigarettes rolled with locally grown nicotine-free tobacco. Girls carry giant nipa leaves covered with the local delicacy - tapioca, chicken and onion in a bamboo shoot - and set a tables in the kitchen.

Kota Kinabalu’s food is very much influenced by Chinese cuisine. To the disappoint of fans of fresh raw seafood, the locals are not familiar with eating raw fish. All their dishes are heavily seasoned with pepper, salt, soy sauce and have locally grown spices. Besides seafood, one of the most popular dishes is sauteed beef and chicken satay dipped in peanut sauce.

Left: A baby orangutan swings from one branch to another at the nature reserve at Shangri-La’s Rasa Ria Resort. Right: A group of locals plays music with instruments. By Lee Sun-min


Getting to Kota Kinabalu

As the holidays approach, it has become easier to book tickets to Kota Kinabalu. Malaysia Airlines has operated a direct flight from Seoul to Kota Kinabalu since Nov. 16 with its new Boeing 737-800 plane. The airline increased the weekly number of flights from two to three.

The flight from Seoul to Kota Kinabalu takes about five and a half hours. Malaysia Airlines offers departing flights at 9:45 a.m. on Wednesdays, Fridays and Sundays and returning flights depart Kota Kinabalu at 11:30 p.m. local time on Tuesdays, Thursdays and Saturdays. For more information, go to www.malaysiaairlines.com.

For more information about Kota Kinabalu, go to www.sabahtourism.com or call +6088-212121. To check if you are eligible for visa-free entry, point your browser to www.kln.gov.my/web/guest/home.

The Mari Mari Cultural Village tour is by reservation only. It offers three tours at 10 a.m., 2 p.m. and 6 p.m. and the tour includes either lunch, a snack or dinner with cultural dancing and music performances. It costs 150 Malaysian ringgits per person. For more information, go to www.riverbug.asia and click on the tab under “Sabah.”