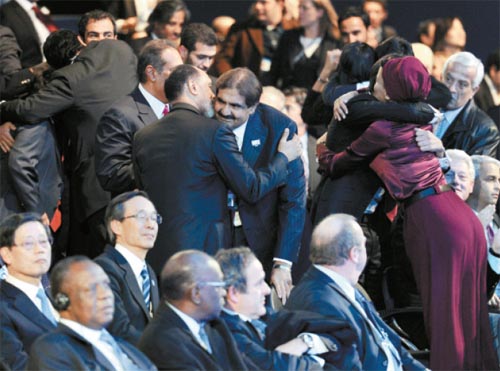 Qatari delegates, standing, celebrate the naming of their country as the host country for the 2022 World Cup games. Sitting next to Qatari delegates is Han Sung-joo, head of the Korean bidding committee, and Kim Hwang-sik, the Korean prime minister, who look disappointed at the announcement. [AP/YONHAP]


ZURICH - Korea failed in its bid to host the 2022 FIFA World Cup, with FIFA’s Executive Committee awarding Qatar the first-ever World Cup in the Middle East. The United States, Australia and Japan had also competed for the 2022 games.

Russia beat England and joint bids from the Netherlands and Belgium and from Spain and Portugal to stage the 2018 World Cup. It will be Russia’s first World Cup.

Korea made it into the third round of voting before it was eliminated, leaving the final choice between Qatar and the U.S. Australia and Japan were the first two to be knocked out.

The voting was conducted by FIFA’s 24-member Executive Committee, which includes Korea’s Chung Mong-joon, who is one of the eight FIFA vice presidents. But two members, Reynald Temarii, a FIFA vice president from France, and Amos Adamu, president of the West Africa Football Union, have been suspended and stripped of their votes following a bribery scandal.

Korea had four, five and then five votes again in its three rounds. Australia received just one in the first balloting, and Japan had three and then two. The U.S. went up from three votes in the first round to six votes in the third, but fell short in the final.

Russia needed only two rounds to earn 13 votes to beat Spain and Portugal, which had seven in the second round.

Korea and Japan co-hosted the World Cup in 2002, a fact that might have hurt both countries’ chances since it was the most recent World Cup among the candidates. The U.S. last hosted the tournament in 1994. Australia and Qatar have never hosted World Cups. No Asian country has staged the FIFA event twice.

Chung, the FIFA vice president, said executive members must have concluded Korea was bidding for the World Cup much too soon after the 2002 tournament. Now, the next finals won’t come to Korea for at least the next two decades.

Under FIFA policy, members of the same confederation as a given host country are ineligible to bid for the next two World Cups. Qatar is a member of the Asian Football Confederation (AFC), and that means Korea and other AFC members, including Australia and Japan, can’t apply for the 2026 and 2030 events.

Chung also lamented the lack of interest at home.

“It’s a shame that we couldn’t deliver the good news to the people back home,” he said. “Qatar had its leader [Emir Sheikh Hamad bin Khalifa Al-Thani] flying around the world persuading executive members. President Lee Myung-bak gave a lot of support, but it would have been better if he had met more executive members.”

Chung said Korea survived two rounds of exhaustive voting as he had hoped, but things went awry from there.

“I felt after we got through the first two rounds, then we would move ahead as planned,” he said. “I don’t know if Australia and Japan helped us. We told Japan we should help out each other since we’re the closest neighbors, but I don’t know how that turned out.”

Han Sung-joo, head of the Korean bidding committee, said he was “surprised” by the results.

“We’d expected to meet either the U.S. or Australia in the final round,” said Han, a former foreign minister. “But Australia was eliminated in the first round. It seems as though the idea of giving Middle East its first World Cup garnered a lot of votes [for Qatar].”

Han said he didn’t get the impression that FIFA President Sepp Blatter backed Qatar, saying, “He could have influenced executive members, but it’s hard to know whether he actually did that.”

Korea built its bid campaign on promotion of peace on the Korean Peninsula and in Northeast Asia through the sport. In its final presentation Wednesday, Korean officials stressed that football had the power to bring citizens in both South Korea and North Korea closer together and that football would facilitate political changes to unite the countries.

Chung Mong-joon argued that the Yeonpyeong attack only highlighted the importance of peace in the region and that hosting the games could go a long way toward achieving that goal.

Han said the fact that Korea held the World Cup only eight years ago hurt its chances more so than the Yeonpyeong bombardment. “The Yeonpyeong attack probably didn’t help,” he said, “but it doesn’t seem like the decisive blow.”