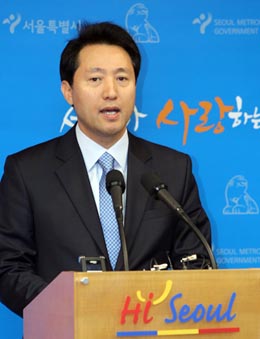 Seoul Mayor Oh Se-hoon made clear yesterday that he will use his authority as mayor to block a bill giving free lunches to students in public elementary schools in Seoul.

The bill passed the Seoul Metropolitan Council, which is dominated by councilors from the Democratic Party, on Wednesday.

“I won’t engage in dialogue with the Seoul Metropolitan Council unless the council retracts the bill,” Oh said at a press conference yesterday morning. “The Democratic Party’s reckless populist welfare policies have shackled the Seoul Metropolitan Government’s administrative affairs and now it is taking Seoul residents’ lives and future hostage.”

Oh’s remarks were made just a day after the Seoul Metropolitan Government on Thursday declared an “all-out war” on the policy.

Mayor has been refusing a request by the Seoul Metropolitan Council to appear at the council’s question-and-answer session since Thursday in protest over passage of the bill.

The bill was passed by 71 of the 89 council members present for the vote, with 18 abstentions, after a series of intense scuffles with GNP councilors, who had occupied the council chairman’s podium but were forcefully ejected before the vote. GNP councilors did not participate in the vote in protest against the bill. The Seoul Metropolitan Government has been in conflict with the council since the June 2 local elections, in which the opposition Democratic Party won a majority of council seats.

The mayor says that the free school meal program is too expensive and idealistic and that he wants to offer free lunches only to students from low-income families. DP councilors say doing so would stigmatize students who receive free meals.

Oh maintained that Seoul should focus on achieving “three no’s” in education: no violence, no private tutoring and no major expenses for school supplies.

“The Seoul Metropolitan Government needs to trim a large amount of the funds that were supposed to be spent on ongoing projects,” Oh said. “[Aside from free meals] Seoul must eliminate violence in schools and focus on parents and students who suffer the burden of private tutoring and school supplies costs.”