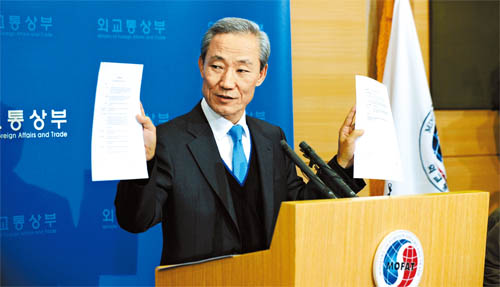 Kim Jong-hoon, Korea’s trade minister, holds up the supplementary agreement of the free trade pact between Korea and the U.S. at the Ministry of Foreign Affairs and Trade headquarters in downtown Seoul yesterday. [NEWSIS]


Korea and the United States may have reached a deal on a revised free trade agreement, but the pact still faces tough scrutiny by legislatures in both countries.

The government is expected to submit the trade pact to the National Assembly as early as February. The FTA was signed in 2007 but congressional objections in the U.S. blocked its passage until Korea agreed to make new concessions.

It is still uncertain whether the incoming Republican-dominated U.S. House of Representatives will approve the deal, although the party is seen as more favorable to trade agreements than the Democrats in the U.S. Both the House and Senate must approve the trade pact.

Analysts in Washington are concerned that other pending issues in the U.S., such as taxes and the budget deficit, could elbow aside the trade deal.

However, senior Republican leaders in the both congressional chambers welcomed the trade pact and said they would cooperate with the Obama administration to gain approval. In addition, Ford Motor Company, which opposed the original FTA, said it would support the revised deal.

Korea’s Democratic Party claimed yesterday that the Lee Myung-bak administration has made unnecessary concessions to the U.S. in return for gaining U.S. military support in the wake of North Korea’s attack on Yeonpyeong island two weeks ago.

U.S. President Barack Obama described the conclusion of FTA talks as showing the United States’ commitment to Korea at a time of rising tensions on the peninsula.

Despite opposition-party criticism in Korea, the ruling Grand National Party holds 170 of the National Assembly’s 299 seats and it appears to be united behind the trade deal.

GNP spokeswoman Bae Eun-hee said in a statement that the trade pact would strengthen bilateral ties.

“The ruling and opposition parties should be level-headed and objective in examining the agreement for the sake of the country’s future,” she said.

The Blue House dismissed suggestions that the trade deal was linked to the need to secure U.S. defense commitments.

“This deal was thoroughly based on economic logic,” Hong Sang-pyo, chief presidential spokesman, said in a press briefing.

Ernie Bower, a senior adviser at the Center for Strategic and International Studies in Washington, said that Congress passing the FTA is crucial because the trade pact would serve as “the stepping stone to moving on with the Transpacific Partnership and leading again on trade in Asia. It is fundamental to American credibility when the president hosts APEC in Honolulu next November.”

The Obama adminstration is expected to submit the FTA to Congress early next year and hopes to gain ratification by the summer.