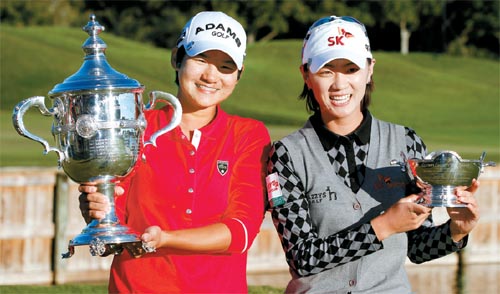 Choi Na-yeon, right, holds up the Vare Trophy for the season’s lowest scoring average. Yani Tseng of Taiwan holds up her Rolex Player of the Year trophy after the LPGA Tour Championship in Orlando, Fla. on Dec. 5. [AP/YONHAP]


Korean golfer Choi Na-yeon capped off her most successful season on the LPGA Tour by topping the money list and winning the Vare Trophy for having the season’s lowest scoring average.

At the LPGA Tour Championship, the final tour event of the year, Choi shot a par 70 yesterday for a combined total of 287 to finish fifth overall. Fellow Korean golfer Amy Yang, who led through the first three rounds, shot 74 to finish one shot back of winner Maria Hjorth.

“I’ve always wanted to win the Vare Trophy more than any other award,” Choi said to Yonhap. “Since the award is given to the player who consistently scored well throughout the season, it’s more meaningful than any other award. I thought that by aiming for the Vare trophy, I would also be in contention for other awards. Having achieved my goal, I completed the season without any regrets.”

The 23-year-old concluded the season with the lowest scoring average to earn the Vare Trophy. Choi finished her third season on the LPGA Tour with a 69.87 scoring average to edge Christie Kerr (69.95). Choi is only the third Korean golfer to win the award after Pak Se-ri won the award in 2003 and Grace Park won it in 2004.

“I had to pay close attention to Kerr,” Choi said about her competition against the American golfer. “I was a bit nervous about my chances after bogeying on the seventh hole of the final round. But I knew that I just needed to avoid falling behind by three shots in order to win the Vare Trophy so I concentrated on the following shots.

“I want to thank the fans who provided their support until the very end. I will work harder during the offseason to perform better next season.”

Choi won two events this season, the Jamie Farr Owens Corning Classic in July and the LPGA Hana Bank Championship last month. She finished runner-up four times and finished in the top 10 a total of 15 times. Choi is only the second Korean golfer to top the money list, with Shin capturing the honor last season.

Shin maintained her top world ranking despite missing the second cut on Sunday.

Choi and Kerr also had shots at winning the Player of the Year award, but having failed to win the LPGA Tour Championship, Tseng of Taiwan, who earned a season total of 188 points, ended up edging out Kerr by six points to earn the top player of the season honor. Choi finished third in the race by earning 180 total points, or eight points behind Tseng.

On a side note, Choi has also been nominated for best dressed in 2010 in an online poll on the LPGA Web site, along with Pak, Michelle Wie and Christina Kim.

Choi is expected to return to Korea today for a break and will return to the United States on Jan. 1 to begin her offseason training.