KCC shows no signs of getting on their game

KCC shows no signs of getting on their game 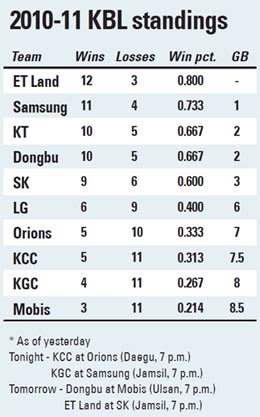 The KCC Egis was tabbed as one of the favorites to win the KBL title at the start of the season but its streaky play so far this season has them looking like anything but winners.

KCC lost to the Mobis Phoebus on Sunday, 82-76, to extend its losing streak to four games. The Egis is now just one game ahead of Mobis, which sits dead last in the 10-team league. Mobis, the defending champion, has been struggling this season but KCC, which lost to the Phoebus in the finals last season, has also been a huge disappointment so far this year.

The Egis has been inconsistent, losing three consecutive games out of the gate to start the season and then winning four consecutive games. But it’s currently suffering through a four-game losing streak. KCC was expected to turn things around after the Asian Games break with center Ha Seung-jin returning to the lineup, but it too is showing no signs of improvement.

Defense is not the problem. In its recent four losses, KCC allowed an average of 80.5 points per game, not far off from their season average of 79.9 points allowed, which is good enough for sixth best in the league. Instead, KCC is struggling on offense.

In the same span of four games, the Egis scored an average of 71.6 points per game, significantly lower than the season average of 78.6.

The top-ranked squads in the KBL each boast a top-notch center or forward. ET Land has Seo Jang-hoon, Samsung has Lee Seung-joon and Dongbu has Kim Joo-sung.

Ironically, KCC’s big men, Ha and Chris Daniels, are at the core of KCC’s woes on offense. As the two tallest men in the league, the two were expected to dominate in the low post. However, the two have been sluggish, slowing down or cutting off the flow of their team’s attack.

With the two big men clogging up space in the paint, there’s less room for the Egis’ speedy point guard Jeon Tae-pung to maneuver near the basket. With a predictable pattern on offense, KCC players have also failed to create open looks.

In Sunday’s loss against Mobis, Jeon shot a dismal 21 percent from the field and finished the game with eight points while playing all 40 minutes. It’s one of the reasons why KCC continues to lose games despite out-rebounding its opponents.

“To be brutally honest, what they’re playing right now is not basketball,” said SBS ESPN color commentator Park Soo-kyo. “There are no outlet passes and players are not rushing to the paint to provide help. It looks like KCC players have forgotten the basics of the game.”

“They’re not the type of squad that should miss the postseason,” said Park. “They need a change. Daniels has a respectable mid-range jump shot so KCC can create some space in the low post by shifting Daniels out of the paint to create both inside and outside chances.”