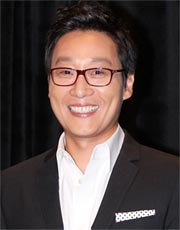 Comedian Lee Hwee-jae walked down the aisle on Sunday at the Grand Hyatt Hotel in Hannam-dong, central Seoul.

The comedian’s wedding comes as somewhat of a shock to his fans, who know him as “Cassanova.” The bride is florist Moon Jung-won. The couple met a year ago on a blind date arranged by a mutual friend.

Top celebrities attended the wedding, including comedians Yoo Jae-seok and Park Myeong-soo, members of the band Super Junior and more.