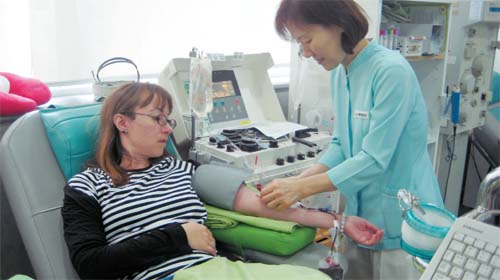 Sarah Crouch, an English teacher in Jincheon with Rh negative blood, donates platelets at a blood center in Shinchon. By Lee Sun-min


After Jay John’s son Yoo-woon was diagnosed in March with lymphoma, a type of blood cancer, the hospital where he was staying advised them not to count on Korea’s Red Cross to secure the stocks of Rh negative blood needed to keep him alive.

After exhausting all available avenues, John found a group of donors eager to help on Facebook called “Blood Connection.” With a low population of Rh negative Koreans, the increasing number of foreigners in Korea gave him some hope. Yet finding a foreign donor in Korea that met the Korean Red Cross’ strict blood donor standards was a bigger obstacle than he had expected.

His son died in April - 35 days after being hospitalized. Yoo-woon’s condition had deteriorated to a point where it was too severe to be treated.

“I know that the disease was the cause of death, but I keep thinking, ‘What if?’ What if he had enough blood for his transfusions? What if he had lived a couple more days or weeks?” asked John.

It was a similar story for a woman surnamed Park. In September she was diagnosed with leukemia and started chemotherapy. The problem, however, was that the Korean Red Cross could not meet her need for Rh negative blood.

“My husband called everyone we knew. As we become more desperate, we posted letters on Web sites looking for blood donors,” said the 36-year-old mother. “I never knew what it felt like to be a minority until I became one. I felt like I was excluded from society,” she said. 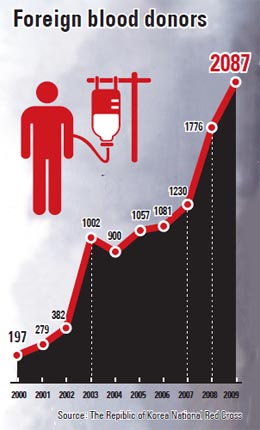 The cases highlight the failure of the Korean Red Cross to acquire and maintain an adequate supply of rarer blood types, often forcing family members to scramble for alternative sources of blood. As a result, Web sites have sprung up to connect those in need of blood transfusions with potential Rh negative blood donors.

The most common blood type among Koreans is A, making up 34 percent of the population; followed by O, taking up 28 percent; B with 27 percent; and AB with 11 percent. Only 0.1 to 0.3 percent of Koreans are Rh negative. Around 20 percent of North Americans and Europeans have Rh negative blood.

Korea’s Red Cross requires the nation’s 15 blood banks to maintain specified stocks of O, A, B and AB blood - all common here. But the organization sets no minimum quota for Rh negative blood.

The Red Cross says it does not keep track of deaths caused by inadequate blood supply.

To make up for the shortfall, many foreign residents with Rh negative blood have stepped in to help, but strict Korean Red Cross regulations preclude most non-Koreans from donating their blood.

Even though the number of foreign donors has increased 10-fold over the last decade - to 2,087 in 2009 - foreign residents and Koreans with Rh negative blood say the organization should be doing more to maintain an adequate stockpile of Rh negative blood.

The Red Cross in Korea lists three requirements foreign nationals must meet to be able to donate blood. First, non-Koreans must have lived in Korea for at least one year without leaving. Second, fluency in Korean is needed to communicate with nurses. In some cases a translator can be used. Third, identification issued by the Korean government or the U.S. military must be presented.

On top of that, foreign donors have to jump through numerous hoops. Foreign donors are required to go to the Korean Red Cross’ Web site prior to their visit, print and fill out an eligibility form, and bring it back to the center. At the center itself, almost nothing is available in a language other than Korean.

The Korean Red Cross says that it is not considering having on-site translators or hiring bilingual nurses. Nor is it considering providing documentation in other languages.

The Korean Red Cross asked that questions be submitted in advance of an interview with the Korea JoongAng Daily on Nov. 22. “[Our donating regulations] do not discriminate against foreigners. They maintain a safe supply of blood,” said Park Kyung-eup, representative of Blood Service Headquarters, a department of The Korean Red Cross.

“We don’t really see that it’s necessary to have those documents or services ready at the center,” said a nurse from a blood bank who refused to be identified. “We don’t pay much attention to foreign donors. Chances are, they are not going to be eligible,” said the nurse. “And there are just too few of them for us.”

She said that half of the foreigners who try to donate blood every month are turned away because of inadequate Korean-language skills.

Sarah Crouch, who got in touch with John through the Facebook group to help his son, thinks more should be done to take advantage of the country’s foreign population.

After going with John to a blood bank in Sinchon, Seoul, from her house in Jincheon, near Daejeon, she was surprised at the reception the nurses gave her. “The nurse said ‘No, foreigners!’ as soon as I stepped in,” recalled Crouch. The nurse did not bother asking if she was eligible to donate. Prior to her visit to the center, Crouch had been aware of the eligibility requirements and knew that she was qualified. After John translated between her and the nurses, Crouch was able to donate.

“I didn’t exactly understand what she said afterwards, but I could tell that she was not happy to see me there,” she said. The Korea JoongAng Daily accompanied her on her third visit with John to the blood bank on Nov. 6.

Even though Europeans and North Americans have a much higher chance of being Rh negative, Europeans are almost never qualified for blood donation in Korea. Most of the European continent is designated as a “mad cow disease risk area,” which disqualifies them from donating blood in Korea.

Korea’s Red Cross regulations are similar to those of Japan’s, which require potential donors to be fluent in Japanese. Although the minimum-stay stipulation varies form country to country, the International Red Cross agrees that fluency in the native language is important to get an accurate assessment of donors’ health.

Some say tapping the foreign population is the only way for the Korean Red Cross to make up for the shortage of Rh negative blood. Suggestions include hiring more bilingual nurses, providing more multilingual documentation and initiating outreach programs to expats who are eligible to donate to raise awareness of the shortages.

Wi Kyung-soo runs http://club.cyworld.com/rh-adonis - a Web site dedicated to connecting Rh negative blood donors with those in need. Because the Korean Red Cross has failed to secure adequate supplies of Rh negative blood, Wi says people are forced to spread the word through Facebook, Twitter and other online resources. He said it is not an ideal system, but it is better than relying on the Korean Red Cross.

“[Our system] can result in an uneven distribution of blood. One patient might get too much, while another does not get enough,” said Wi. “And sometimes it goes straight into the garbage because of excess supply.”

Korean regulations dictate that donors visit blood banks every two weeks at the most for platelet donations, and once every two months for blood donations. Only in rare instances does the Korean Red Cross allow a donor to give more than one unit of blood to one patient, which makes it even harder to secure a stable supply of Rh negative blood for a patient.

There are 20,000 Rh negative blood donors registered with the Korean Red Cross’ blood information management system, but the organization still struggles to come up with Rh negative blood when it is needed. Critics say it is the result of poor management.

“The list has been accumulating for decades. So the contact information is sometimes out of date,” admitted the Red Cross.

The Korean Red Cross is currently cooperating with the government to come up with a new plan to deliver Rh negative blood in a safer and quicker manner. The details of the new program have not yet been released.

John’s son, Yoo-woon, needed 70 units of blood in his 35 days in the hospital, but was only given 30. Of the 30, 18 units were from donors who John personally found. The Korean Red Cross was only able to come up with 12 units over the period.

“I was willing to take blood from anyone, even though there was a risk of infection ... if there was a possibility my son could suffer less,” said John.