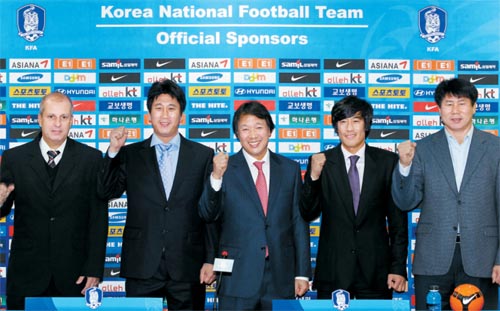 Cho will have to trim the roster to 23 by Dec. 26 and his biggest goal is to find the right supporting cast of domestic players who can supplement the overseas-based players who make up the core of the national team.

“Choosing players who can compliment or play well alongside overseas-based players is most important,” said Cho at a press conference yesterday. “The players playing professionally in Europe and the Middle East have pretty much secured their spots on the team. We’re looking for intelligent players who can play an up-tempo style of game.” 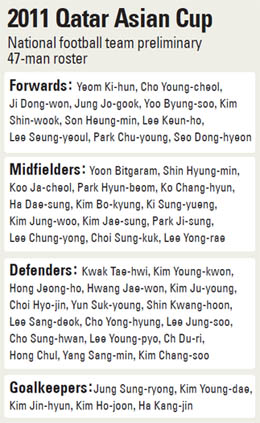 One of the biggest tasks for Cho will be to find a suitable partner for forward Park Chu-young.

Since being named the successor to Huh Jung-moo as the manager of the national football team, Cho managed to win one, draw one and lose one against Nigeria, Iran and Japan, but his offense looked stagnant at times and has yet to find the right combination of forwards.

Yoo of Incheon United is coming off an impressive season in which he scored 22 goals in 28 games and is expected to be given plenty of chances to prove himself in the upcoming training camp.

“We decided to include players who played well at the 2010 Guangzhou Asian Games and in the K-League,” said Cho. “There are many capable players on the preliminary roster. We will decide on a final roster by pitting positional players against each other in competitions.”

Another area of concern for the national team is the defense, which featured three backs during Cho’s first games as manager. Cho has experienced defenders in Lee Young-pyo, Cha Du-ri, Cho Yong-hyung, Lee Jung-soo and Kwak Tae-hwi, among others.

“Our players had trouble adapting to the new defensive system,” said Cho. “I will stick with the three-back system as the base defensive formation but will tweak it a little.”

Cho and his coaching staff also decided to include Lee Sang-deok of Daegu FC on the preliminary roster. The 24-year-old defender is seen as a surprise selection, but the 6-foot-1 Lee has a dangerous header as well as good positioning and passing skills.

Overseas-based players like Park Ji-sung and Lee Chung-yong are expected to join the team on Dec. 27 and 28.

Korea won the inaugural Asian Cup in Hong Kong in 1956 and the following tourney on home soil in 1960 but has not won the tourney in 51 years.

Korea has been grouped with Bahrain, Australia and India and will play its first match against Bahrain on Jan. 11.