SK Knights shoot for the sky at basketball arena

SK Knights shoot for the sky at basketball arena 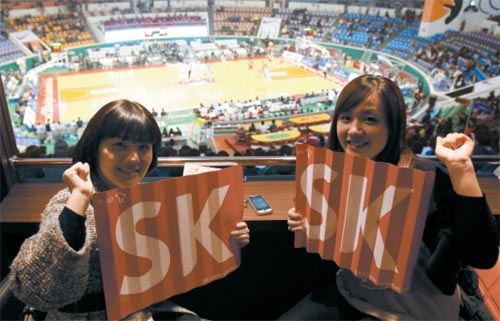 Fans support the SK Knights from a sky box at Jamsil Students’ Gymnasium during SK’s KBL game against the Mobis Phoebus on Sunday. By Kim Min-gyu


Despite a slight drop in attendance so far this season, the SK Knights’ front office is all smiles thanks to the addition of new box suites.

The Knights are averaging 5,116 fans per game through Monday, 400 shy of the 5,583 fans per game they attracted last season around this time. The decrease in attendance is only natural when considering the season opener overlapped with the Korea Baseball Organization postseason. The KBL also took close to a month off due to the 2010 Guangzhou Asian Games.

A decline in attendance figures normally results in lower profit totals for the front office but that has not been the case for the Knights. SK is expecting a 100 million won ($88,100) increase in profits this year because it introduced several sky box suites that have brought in good money for SK.

The Knights took notice of basketball arenas in the NBA and introduced sky boxes for the first time this season at Jamsil Students’ Gymnasium in southern Seoul, their home arena. The suites are located in the upper level, but visitors who purchase these seats are given premium services.

“We were concerned at first,” said Jang Ji-tak, an SK Knights official. “Since the sky boxes are pricey, if the customers are not satisfied with the services, it can lead to a negative effect on the overall team image.”

Each suite can seat up to 16 people and season tickets for each suite goes for 13 million won. There’s also an option for a half-size box for half the price.

Jamsil Students’ Gymnasium is currently fitted with six half-size suites, which can seat eight fans. Five of the six have been sold so far.

The area at the top of the arena was, through last season, home to the cheapest seats, so the idea to install luxury boxes in the upper bleachers was seen as a huge gamble by many.

The Knights’ front office decided to focus on catering to their fans needs. Visitors to the sky box suites are served salad, pizza and hot dogs.

In addition, fans receive a card autographed by the SK players and get an opportunity to take photos with the players.

All this has proved that box suites can be a success. Large corporations have been purchasing the boxes as a means to provide their employees with opportunities to enjoy basketball games after work.

“Our profit from ticket sales topped out at 8 million won last season,” said Lee Jae-ho, SK Knights marketing team manager. “At the current rate, we can surpass last season’s figures without increasing attendance numbers. We also expect those figures to see a significant increase if we advance to the playoffs.

In contrast, the Samsung Thunders, who share the arena with the Knights, did not pay as much attention to team marketing. The Thunders boast moderate attendance at 3,329 per game as of Monday.

“Lee Sang-min retired at the end of last season and we also had three players missing from our lineup during the 2010 Asian Games,” said Jung Sung-sul, manager of the Thunders public relations team. “We are also not padding our attendance numbers like some of the other teams and that’s probably one of the reasons for what appears to a drop in our attendance.”