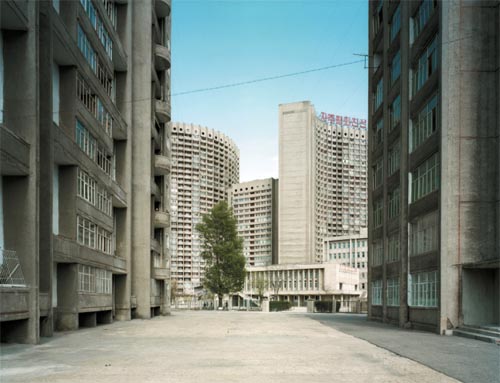 A photo of a Pyongyang street, empty and desolate, with high-rise buildings in the background, hangs at Gallery Hyundai in Sagan-dong, central Seoul. The work by Thomas Struth quietly and plainly shows how “really depressing” the city is, as the renowned German photographer once said of his short stay in the North Korean capital.

The gallery is sponsoring Struth’s first solo exhibition in Korea through Jan. 9.

“You cannot walk by yourself in Pyongyang,” Struth said during a press conference at the gallery last month. He added that a guide accompanied him every moment of the trip and constantly interfered with his camera angles. The photo was his only gain in a city where, as he put it, “you cannot take photos when a cable runs across a Kim Jong-il portrait, because it is disrespectful.”

The photo is juxtaposed with another of Seongnam, South Korea, evoking a feeling of irony. The apartment complex in the Seongnam photo, which was recently built in an empty field of a new residential site to meet the high demand of property-loving South Koreans, looks as desolate as the Pyongyang buildings. It is odd how similar the landscape of the highly controlled communist city is to the uncontrolled desire exhibited in the capitalist city. 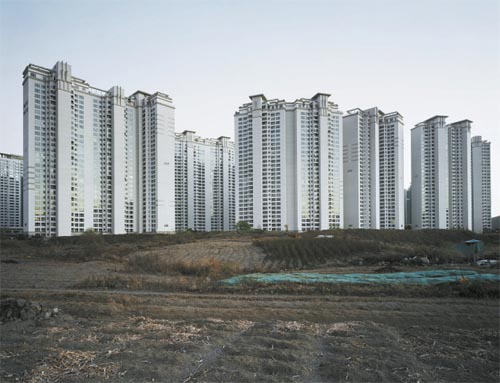 
Struth told the press he was surprised by the density of buildings in South Korean cities.

“If you [South Koreans] continue to build buildings at the current speed, unification of two Koreas will be inevitable within 20 years because you will need more space for the buildings,” he said with a laugh.

He said that South Korea is a very interesting place for him, because he has always been interested in the extremes of industrialization, human technology and desire. His interest has produced spectacular photos of shipyards on Geoje Island in South Gyeongsang, which are also part of the show, entitled “Korea 2007-2010.”

To produce the photos in the exhibition, he spent three years traveling to major Korean cities such as Busan and Ulsan.

“I see cities as an outsider, so I don’t see only the beautiful sides of them,” he said. “When I take photos, I feel some kind of energy in the societies and try to get as close to the energy as possible.”

Meanwhile, another photography show revealing a cross-section of Korean cities provides a different perspective than that of Struth. The show, “xyZ City,” features 10 local artists and is going on at Times Square, a shopping complex in Yeongdeungpo District, southwestern Seoul. 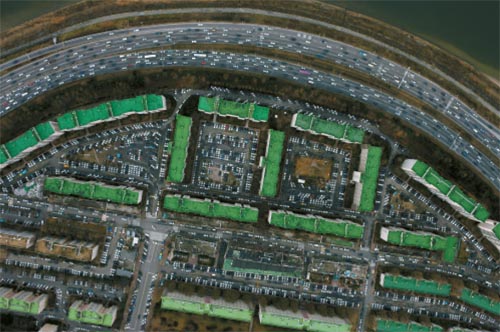 “Apgujeong Hyundai Apartments, Vertical” (2007) by Lee Dueg-young is part of the “xyZ City” exhibition. Provided by the organizers


The exhibition includes photos of redevelopment projects and of churches with red neon crosses as well as photos of high-rise apartments - now indispensable elements in Korean cities.

“A three-dimensional space has three x’s: x, y and z. For Korean cities, the z axis overwhelms x and y… z exists based on the sacrifice of x and y,” Lee Young-june, professor at Kaywon School of Art & Design and the director of the exhibition, said in a press release. “Urbanites work, rest and reproduce, just like walking on a tightrope, in these extremely unbalanced spaces.”