Kim, a man in his late 50s, had his life turned upside down last year. It was an ordinary September day for Kim when he found out that a group of netizens had taken a profile photo from his blog and spread it on the Web, claiming it was that of child rapist Cho Du-sun.

More than a year has passed, but the incident continues to haunt him. “If I talk about the case, it will remind people of it again. I just don’t want to talk about it. I can’t trust anybody,” Kim told the Korea JoongAng Daily. His name ruined, Kim has sued more than 100 netizens.

Who are the people behind the so-called online investigations? They are neither cops nor private detectives. Instead of high-tech gadgets, all they have at their disposal is a keyboard, computer and a lot of time on their hands. Most of the “evidence” they pull from the Web consists of real names of people, places of employment, e-mail addresses and other personal information. They are known as “netizen crime scene investigators.”

Sometimes their online sleuthing turns up crucial clues that help in official investigations. But all too often their actions ruin lives and have driven victims to suicide. 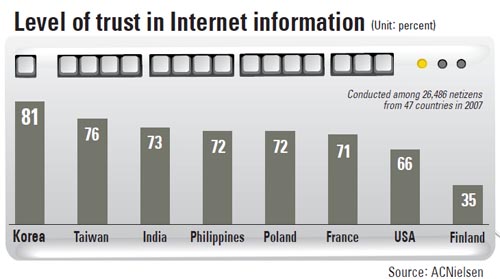 NCSI: Who are they?

By far the biggest organized NCSI group is known as DC Inside, an Internet portal with more than 1,000 bulletin boards. Among the boards, Comedy Gallery is where the majority of NCSIs spend their time. It is a bulletin board where pictures are uploaded and real identities are discussed. Even the operator of the Web portal does not know what makes the Comedy Gallery the center of attention.

“We don’t know who they are because we don’t collect their personal information,” said Park Yu-jin, head of public relations for DC Inside.

The Comedy Gallery is where netizens congregate to put their resources together to uncover the real identities of ordinary people who find themselves in the middle of controversy.

From obtaining and sharing secret wedding photos of celebrity couples, revealing information of the famous “loser girl” and “dog poop girl,” no case is too big or too small for the NCSIs.

While it can be argued that DC Inside has contributed to public safety and raising awareness, the anonymous netizens have come under heavy fire for libel.

Indeed, the group regularly runs amuck of Korea’s strict defamation law, which bars the publication of personal information, even of parties guilty of crimes such as murder and adultery, unless it is in the public’s best interest.

Sung Ki-yeon, an MBC producer who made a two-part documentary on Korean rapper Tablo, became a victim of NCSIs.

The Stanford-educated rapper Tablo was accused of faking his education credentials, a charge that was refuted after a police investigation. Netizens who thought producer Sung was in Tablo’s corner found her e-mail address and mobile phone number and spread it over the Web.

“I was stunned,” said Sung when asked how she felt after her personal information was released.

“But you know what? Just a handful of people contacted me. That was more surprising than the fact that they found out my personal information,” she said.

Lee Su-jeong, a professor of criminal psychology at Kyonggi University, is not surprised. Lee says many who associate themselves with the work of netizen crime scene investigators and similar online activities are afraid of the real world.

“If you have to face someone offline, it means that you have to be responsible for yourself. For them, it [disclosing personal information] is just for fun. That’s it.

“And their actions can be dangerous,” said the professor.

Another recent target of a netizen crime scene investigation was a 35-year-old middle school teacher who was accused of having a sexual relationship with her 15-year-old student when his parents revealed racy text messages sent by the teacher.

After the case was reported in October, it took less than 24 hours for NCSIs to find the teacher’s personal information, including her age, name, picture, personal Web page address and place of employment. Even her husband’s personal information was revealed. The teacher was not charged with a crime, and the police did not investigate because the student was of age and the relationship was deemed consensual, but her reputation was tarnished and she resigned from her position.

NCSIs also flout the presumption of innocence stipulation in Korea’s constitution, something rapper MC Mong found out when he was targeted by NCSIs. In September, he was accused of dodging military service by pulling out 12 of his teeth. Missing a certain number of teeth exempts men from compulsory military service in Korea.

While the rapper strongly denied the accusations, sleuthing netizens found an online post the rapper had made in January 2005 asking whether missing molars would be enough to exempt him from service. A captured screenshot of the question was taken into consideration by prosecutors who were collecting evidence earlier this year. Even though the case is still under investigation, his show “Haha Mong” was cancelled in September and his TV commercials were pulled off the air.

In May, a student that cursed at a cleaning woman in her college bathroom became a victim of overbearing netizens. After the janitor’s daughter wrote a post on a Web portal describing the humiliation her mother suffered, it did not take long for NCSIs to find out who the college girl was.

Her picture, major, school and even a voice file - recorded by someone’s mobile phone who was at the scene - were spread across the blogosphere. The case caught on such a life of its own that the daughter of the janitor eventually intervened, asking netizens to lay off in their online pursuit and personal attacks on the college student.

There are some positive cases of NCSI contributions to the society.

In May, parents of a girl gone missing in Jinju, South Gyeongsang asked NCSIs for help after growing frustrated with a slow police investigation. After the posting was uploaded onto a Web portal, the family was reunited with their daughter in just seven days. 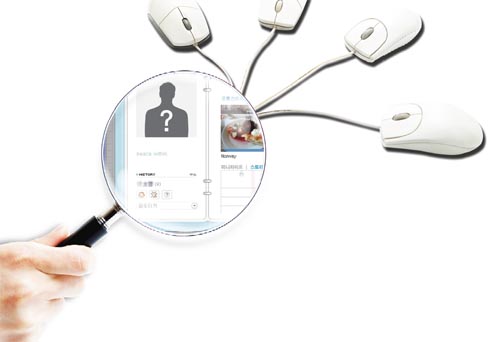 In a nation where more than 95 percent of households have access to high-speed Internet, it does not require much know-how to find someone’s personal information if you have somewhere to start.

“When social-networking Web sites landed here about a decade ago, people weren’t overly concerned with privacy.

“On the contrary, they wanted to put themselves out there as much as possible by sharing photos, journals and even phone numbers with total strangers,” said Hwang Mi-kyung, assistant team head of public relations at AhnLab, the nation’s biggest security solutions provider.

Cyworld, the country’s first social-networking Web site, has attracted 25 million members as of this year since it was launched in 1999. That is half of Korea’s population.

Most investigating done by NCSIs starts with generic name searches, going through personal Web pages and searching for postings written by certain IDs. And Koreans are not exactly making it tough for them: more than Internet users of other countries, people here are so trusting of online social media that they too easily give up their personal information online for everyone to see.

That is a problem, say experts, because all netizens need to ruin someone’s life is a name, date of birth or e-mail address.

“Traditionally, Korea is a country that has a strong belief in conspiracy theories. This nation has been far from transparent because of past political regimes. It has made people resort to sources other than the government or mass media,” said Rando Kim, a professor of consumer sciences at Seoul National University.

“For them, the Internet is a reliable source,” Kim added.

The global market research firm ACNielsen conducted a survey in 2007 among 26,486 Internet users in 47 countries. The survey found that 81 percent of Koreans take online reviews into consideration when purchasing goods, while 66 percent do so in the United States and just 35 percent in Finland. The survey also found that Korea is the fifth-biggest believer in the power of word of mouth.

“It’s a basic human instinct. [Koreans] easily believe in rumors. Back in the old days, when there were no news outlets, you had to quickly respond to rumors. Otherwise, you couldn’t survive,” said Kwak Geum-ju, a professor of psychology at Seoul National University.

“For this reason, negative rumors spread quicker than positive ones. One major characteristic at play here with [NCSIs] is that it is based on ‘groupism,’ meaning they want to meddle in and know what others are doing.

“Twitter and other social-networking tools fuel their inner desire to respond to rumors and spread them,” Kwak added.

Rankey.com, a Seoul-based Web site analysis company, said that the number of Twitter users had jumped 19 times by May from a year ago. Me2DAY, a local runner-up to Twitter, also saw its users increase 11-fold by May from a year earlier.

Unlike other global Web sites such as YouTube and Google, Twitter has not provided Koreans with as localized a service, but has gained a solid backing here nonetheless.

With social-networking sites mushrooming in Korea, major local Web portals have even started displaying individual Internet users’ short messages that are uploaded onto their Twitter or Me2DAY accounts.

Psychology professor Kwak from Seoul National University says more people will be victimized in the near future as long as there are no guidelines stipulating what is fair game for netizen crime scene investigators to release to the public.

“Cyberattacks are more traumatic because you know what you are up against in the real world, but you don’t know what your enemies are capable of in cyberspace,” said Kwak.

Currently, there are no laws - other than libel - related to releasing someone else’s personal information.

Experts say that even though the information NCSIs dig up is already public, more laws are needed to prevent the spreading of someone’s personal information for malicious purposes, even if what that person did is illegal or even considered immoral by some.

“We live in an attention age when everyone can expose themselves over the Web,” said Kim Bong-seob, a senior researcher at the National Information Society Agency.

“In other words, it means that we’re living in a glass house. Your every word and action could be found by a netizen if he runs a simple search.

“A simple posting or uploaded picture could eliminate you from job contention as they are interpreted in a way that you had not intended.”