The high cost of the patent wars

The high cost of the patent wars 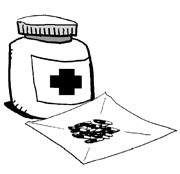 In the old days, people were not always rewarded for their inventions. A craftsman visited the royal palace one day and showed a beautiful glass vase - and then thew it to the ground. To everyone’s surprise, it didn’t break. Instead, it made a deep hole in the ground. When he saw what had happened, the emperor Tiberius asked the craftsman if anyone else could do what he did. When the craftsman boasted that he was the only one, Tiberius had him beheaded. He was worried that the price of his gold and silver would plummet due to the mysterious glass.

It was during the Renaissance that the importance of invention and innovation was recognized. Filippo Brunelleschi, who built the dome of the grand cathedral of Florence, acquired the first patent in history for a ship he designed to transport granite for the dome. But he did not make money on the ship. It sank on its maiden voyage with 50 tons of granite on board.

The patent system developed gradually. Today, people know that invention and innovation can not flourish if there is no assurance of financial gain attached. Yet the counter-arguments are difficult to refute. Those who claim that the patent system should be abolished say that the desire to do good, not make money, can be the mother of invention. In the pharmaceutical industry, especially, the patent system is a punching bag. Patent rights are openly violated based on the claim that a patent is nothing compared to a human life. A typical example is the government of Thailand, which produced a generic drug for AIDS without permission in 2002. Although there was lots of protest in the international community, the Thai government responded that they were able to save a large number of lives because the price of the drug had plummeted to $30 from $500.

Pharmaceutical companies complain a lot when their patent rights are violated because of the time and money they invested in developing a new drug. When their patents expire, they direct their complaints against companies that produce cheap generic drugs. That is why the U.S. insisted, in Korea-U.S. free trade agreement negotiations, on delaying the sale of generic drugs in the market even after a patent expired. It is said that the suspension period was lengthened when the agreement was renegotiated.

That is a good thing, but I worry that it will be difficult for Korean businesses to change their practices completely. As we have learned, change and innovation do not come overnight.