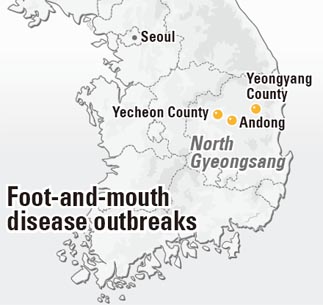 Another cattle farm in Yeongyang County, North Gyeongsang, was added to the list of foot-and-mouth disease-infected livestock farms yesterday, slipping through quarantine control zones while endangering the livestock industry region. The farm is located beyond the quarantine radius at 32 kilometers (20 miles) away from the epicenter.

As the FMD virus migrates beyond the Andong region and has been confirmed in nearby towns, health officials are stepping up quarantine measures to cut off the virus, especially in boundary regions in North Gyeongsang. Quarantine posts have been increased to 360, up from 298.

More than 100,000 heads of livestock have been slaughtered.

It is the sixth time that Korea suffered from FMD since the disease first appeared in the country in 1934. Other cases appeared in 2000, 2001 and three times this year.